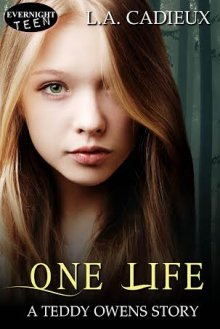 L.A. Cadieux - Letter from the Author

Today we have author L.A. Cadieux dropping on over. She's written a letter to you.

Strong and sassy, sixteen year-old Teddy Owens has barely considered her own mortality, unaware within her lays dormant the ability to save one person from death...a particularly difficult decision to make when so many people she loves are in desperate peril.

Intent on leaving her troubled childhood in the past, snow-obsessed Teddy has moved from Texas to her uncle's secluded Rocky Mountain estate—a beautiful place, but colder than she imagined. Curious about her surroundings she ignores the persistent advice of new friends and digs to uncover the allure of the mysterious estate—only to discover her friends have terrifying secrets of their own. With each new revelation, Teddy is thrust further into a clandestine underworld where she is hunted for her supernatural power.

After her family's sordid history of betrayal is unearthed, her world is rocked when she must travel to New York City and take an oath promising her power to an arrogant heir of the underworld, Leevi Koivu. Can she trust him?
In the end someone she loves, but cannot save, will die.

Seven years. That is how long it took me to sign my first publishing deal. Four years to find an agent. Seven years of rejections, three manuscripts, tears, hurt feelings, self-doubt, and a lot of learning. It did not happened overnight, but I’ve found this business likes to hand out a few hard knocks before building you up—and I wouldn’t have any other way. The low points are important for creative growth, as much as I may not have appreciated the value in those moments right after opening another rejection letter. The truth is it’s hard to appreciate success…without knowing what it feels like to have failed.

My mother once told me, try to pick a career that will enable you to keep care of yourself. Naturally, I decided to be practical and earn a degree in Management, specializing in Business Economics. However it wasn’t more than a couple years after graduating—much as I love my job—a little corner of my soul called out for me to create…something, anything. It’s hard to believe now, but at this point I’d only written a couple short stories and a few essays—I can’t remember writing anything longer than 30 pages.

My perspective changed after I watched the film version of Bridge to Terabithia (2007)—a film inspired by the popular children’s story written by Katherine Paterson.

I told my husband, “I want to write a novel.”

“What kind of novel?” he asked.

“Not sure, maybe fantasy. I’ve thought about trying to write a novel before I turn 30.”

I laughed. “When would I find the time?”

“The only person holding you back from writing—is you,” he said. “Plus, if you like it, you’ll find the time.”

“But I have no business trying to be a writer.” I bit my lip. “I’m terrible at spelling.”

“Knowing you, you’ll work hard and improve,” he said. “Do it for fun.”

That evening in my little office on the second floor of our new home, I sat down at my desktop computer (I bought a laptop soon after) and stared at the cursor on a blank page. It must have been late because I remember it was dark outside. I nervously tapped my foot on the chair’s wheel—the same chair I’d used since high school. As I moved the seat back and forth, I contemplated where to start.

I had no plan.

All I knew, I wanted to write.

I’d be hard pressed to remember what I typed (surely it changed later) but those first words were the beginning of an incredible journey. As it turned out, the first 100 pages are the most difficult to write…and by the time I finally passed 100 pages I had developed an addicted passion.

By late 2008, several often-used letters had been worn off the keys on my laptop. These worn letters were physical indicators of exhausting all-nighters, too many drafts to mention, and hundreds if not thousands of pages written…and then rewritten.

I never did find a literary agent who would represent my first manuscript. After many rounds of rejections, I made up my mind to continue writing even if I was never published. It was a given, as soon as I’d finished writing one manuscript—I’d start another.

The second novel I wrote, ONE LIFE, would be the key to nabbing a wonderful literary agent, Marisa Corvisiero. My second story would end up catching the attention of Evernight Teen Publishing. My debut novel will be published on June 20, 2014…I’m 30 years old.

ONE LIFE is an emotional and riveting coming of age tale of romance, lies, and difficult choices. It explores themes of self, family, duty, and betrayal. Strong and sassy, sixteen year-old Teddy Owens has barely considered her own mortality, unaware within her lays dormant the ability to save one person from death...a particularly difficult decision to make when so many people she loves are in desperate peril.

One of my favorite quotes comes from T. E. Lawrence, “All dream but not equally. Those who dream by night in the dusty recesses of their minds wake in the day to find that it was in vanity, but the dreamers of the day are dangerous, for they may act their dream with open eyes to make it possible.”

Thank you readers for being the icing on the cake. I encourage you to never give up on your dreams.

My name is L. A. Cadieux, I’m a YA/New Adult writer and social media-aholic living in Calgary, Canada. Since childhood I've been mesmerized by stories of fairy tales, knights, Greek and Roman mythology and comic book heroes. Naturally, I wanted to create my own worlds/characters and set off on a long quest to write fantasy novels. Creative, yet business minded, I went on to earn a Degree in Management from the University of Alberta Augustana, specializing in Business Economics.  I'm a Project Manager by day (in IT) and by night I work on my stories. After shelving some of my earlier manuscripts I decided to focus on ONE LIFE, the first in a series of Teddy Owens Stories.  As a proud mom of two – I spend my days and nights multi-tasking. Random facts: Tim Hortons coffee and ketchup chips are my vices. I’m also a fan of the HBO and CW Networks. My favorite book is Jane Austen’s PRIDE & PREJUDICE.