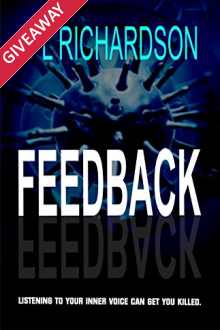 Seventeen year old Ethan James can’t bear the boring life he’s living while waiting for a kidney transplant. When a donor is finally found he’s on track to getting old life back as an ice hockey champion. However, two weeks after the operation, he’s kidnapped by a man who believes in Feedback – the theory that organs retain the memories of the donor host. At least he isn’t alone. Abducted with him are sixteen-year-old Florida Bowman and fifteen-year-old Jake Inala, who also received the spy’s organs. The kidnapper tells them that their donor was a CIA agent. And now this terrorist wants to know where the dead spy hid the deadly bacteria bombs so he can carry on with his plans to destroy the world. The teen’s lives are in danger because they don’t believe that Feedback is real. Yet, during interrogation they begin to hear voices, telling them information they can’t possibly know: the location of the bombs, the deactivation codes; the time the bombs are set to explode. Now they’re faced with something more terrifying than organ transplants. They must trust that the voice in their head is real and save the planet. Or accept that hallucinations are causing the voices and that their bodies are rejecting the organs. In this teen spy thriller, listening to their inner voice could get them killed.

D L Richardson is an author of speculative fiction. She has two novels published with a small press publisher, and she self-published Little Red Gem in October 2013 to maintain her goal of writing one novel per year. She is currently working on children’s book manuscripts and on the second draft of a 100,000 word adult sci-fi novel.

She has a non writing background in sales and marketing, working as a sales rep in the music and DVD industry. She also has a background in finance and small business.

She lives on the NSW south coast of Australia with her husband and dog.