Thank you for having me, Night Owl Reviews! To me, there is nothing better than watching a good western. I grew up with them and they fed my love of cowboys and the old West and sparked my own stories.

I’ve been asked to choose five and I don’t know where to start. There are so many.

1. Lonesome Dove – This has to be my all-time favorite. What great characters and the acting is flawless! I think this definitely portrays the tough, gritty West as it really was. There’s life and death, a lost love, a young man who yearns for his father’s acceptance, and women who’ve seen very hard times. Everything came together perfectly for this.

2. Rooster Cogburn – I love this one for the deep connection John Wayne’s character had with Katherine Hepburn. Rooster Cogburn is such a rough, crochety character on the outside but inside he has a deep affection for Eula Goodnight. He tries to hide it underneath whiskey but it doesn’t work. She sees right through him. These two made me laugh. Really great dialogue.

3. The Outsider – This is not to be confused with The Outsiders, the contemporary movie Matt Dillon and Tom Cruise made famous. This made-for-TV movie stars Tim Daly as outlaw Johnny Gault. It’s taken from the novel by Penelope Williamson and is excellent. Wounded and near death, Johnny Gault is taken in by a widowed sheep farmer which puts her at odds with her religious clan called the Plain People. Of course, she falls in love with Johnny Gault. I fell in love with him too. Oh man! Such a handsome, rugged outlaw! Go find this movie! You won’t be sorry.

4. Hell on Wheels – This was technically a series but it remains a favorite. If you want grit and realism, this one is for you. Anson Mount plays Cullen Bohannon who is trying to find his wife’s killers. He follows them to a railroad camp and gets a job working on the transcontinental railroad. He does avenge his wife. I love this show for its portrayal of a man willing to do anything to follow a dream. Cullen Bohannon worms into your heart and you love his deep convictions and lightning fast draw! Oh and by the way, he’ll make your heart race! No one is more magnetic than Cullen Bohannon.

5. Desperado – This is a huge favorite from the ‘80s I believe. Drifter and gunslinger, Duell McCall, is played by Alex McArthur and I loved this one for how quickly I forged an emotional bond with Duell. I rooted for him as he tried to clear his name of a murder. And I cried when he rode away from each town, alone and unwanted. This TV movie is a huge reason why I felt compelled to write historical western romance. I had to give the lonely cowboy someone to share his campfire with...and his bed. I gave my character in Knight on the Texas Plains a version of his name – Duel McClain – because I loved this movie so much.

That’s it. Those are my five choices. Like I said, there are tons more with Sam Elliott, Tom Selleck, Robert Duvall, Kevin Costner, and many others. All have inspired characters in my books.

Roan Penny in my new release To Catch a Texas Star would be played by Clint Eastwood’s son Scott if they made this into a movie. Roan is one tough, determined cowboy. And when he loves, he puts his whole heart and soul into it. Roan is a drifter searching for a place of his own and some measure of peace that’s eluded him all his life. He calls Marley Rose McClain his Texas Star, his good luck token, and that she is. The book comes out on July 3rd.

I have a new series called Outlaw Mail Order Brides coming out early next year.

He'll do what it takes

The son of a notorious outlaw, Roan Penny yearns to make his life count...but heroism comes with a price. Left badly injured, only the kindness of a gentle stranger can save him. He longs to be with the captivating beauty—his savior, his Texas star, his Marley Rose McClain—but he knows he'd bring her nothing but trouble.

If only he could convince his heart of that.

Marley's lived a charmed life, and she's determined to spend the rest of her days at her quiet hero's side...but she isn't what she seems. A life-long secret threatens to destroy everything she knows—and everything she could hope to be. As dangerous men threaten to pull her back into the shadows, a desperate Roan must ride hell-bent for leather to save the other half of his heart...before he can lose her light for good.

This giveaway is now over. The winner is displayed in the comments. 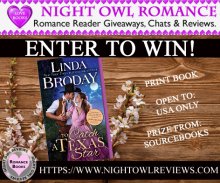