Excerpt: The Best Cowboy Christmas Ever by June Faver

June Faver is sharing an excerpt with us for her Christmas cowboy book. This starts out a new series. You can enter to win a copy below! Enjoy!

Genie Guillory let out a gasp when her car started to skid. She tried to compensate, but totally lost control. Her heart raced as she struggled to guide the vehicle across the icy highway... But, no... The ‘black ice’ sent her skidding back and forth, fishtailing across the wide roadway. She kept spinning the wheel, trying to regain control, but and the vehicle did a complete 180 degree turn before veering into a ditch. It was a slow-motion nightmare when she went sliding off the roadway and nose first into a snow drift.

She checked her passenger, but Angelique seemed to have weathered the excitement with no ill effects. In fact she had slept through the entire episode.

Genie took a moment to give thanks for their survival, and to stop her hands from shaking...hands that now held a death grip on the steering wheel. She heaved a huge sigh, her heart still trying to beat its way out of her chest.

Okay, now to get back on the road, but not as fast this time.

The motor was still running, so she shifted into reverse and looked over her shoulder before applying a little gas. Slowly, now.

The wheels spun in the snow, but the vehicle did not move. She pressed the gas pedal again, but again, the wheels spun without actually moving the car.

She rested her forehead against the steering wheel. No. Not when I’ve come so very far.

Genie refused to give in to self pity. She sucked in a deep breath and, at the same time pressed her lips together. Pulling her scarf around her head, and buttoning her jacket she tried to drum up a fresh dose of optimism. Too bad she didn’t have the proper clothes for this weather.

She opened the door, pushing hard to dislodge it from the snow. When she stepped out, her shoes sank into almost a foot of the white stuff.

It’s crunchy. Somehow she had thought it would be soft and mushy like a marshmallow. And cold. It was as though her feet had been instantly frozen.

Genie looked up and down the highway. Although it was quite a nice and well kept four lane route, there was no traffic. Probably all the smart people around here are huddled around the roaring fire in their homes.

Her eyes watered, and it felt as though the cold was abrading her cheeks.

Glancing up at the gray sky, Genie wished she had hung out a little longer at that Mexican restaurant in Langston. It had been brightly decorated with strings of tinsel and a large Christmas tree sat in one corner, adorned with very colorful decorations.

There was canned music. Mexican Christmas songs were playing, and all the patrons seemed to be pretty jolly. Perhaps it was just the small town vibe…or it might have been the seasonal cheer and the fact that quite a few of the diners chose a bottle of beer to wash down their lunch. Feliz Navidad the voices sang. Now she had that tune playing in her head.

At least it was warm there, and the waitress was friendly. Milita, her name was… “Feliz navidad,” Milita had said. “Y prospero ano nuevo.”

Genie wanted to have a prosperous new year, and to be able to enjoy the holidays without looking over her shoulder. She had too much at stake, for herself as well as the one she loved. My Angel.

Milita had given Genie directions to her destination. The place she hoped they would be welcomed. It was almost Christmas, after all.

Genie saw a vehicle coming her way. It must have been coming from or at least through Langston. She was torn between hoping for a savior and fearing for her safety. The total isolation of her situation was just dawning on her. Oh, please...

The vehicle was a truck...a pick up truck.

She stood, frozen in place and, in fact, she felt frozen. She turned her back on the strong breeze, her hands tucked in theher jacket pockets.

As the truck neared, the driver slowed down. Her heart fell when he passed her by, but she realized he was pulling over on the shoulder just ahead of her snow bound vehicle.

Genie pressed her lips together, hoping this person could help her.

The driver’s side door swung open and a man got out. He looked like the consummate cowboy. Boots and denims, topped off with a cowboy hat. He was wearing a tan suede jacket lined with fleece and leather gloves. He was tall, and looked like a giant Y coming toward her, with broad shoulders, tapering down to long legs.

He appeared to be pleasant as he approached, his breath coming out in wisps of white streaming behind him. He had sandy blond hair, and brown eyes.

“Hey, little lady. Looks like you’re in a jam.”

“Um, yes. Well, the road was really slick.” She sounded defensive, even to her own ears.

“Yeah, that happens a lot around here this time of year. The road crew just hasn’t gotten out this far to spread sand on the highway.” He pointed to his truck. “We, mostly, drive with all-weather tires.”

“Oh, no. I have to wait for sand?” Desperation was taking over her psyche.

He raised his gloved hands. “Not at all. I can pull you out of the snow bank, but we have to see if your car is driveable. You may have twisted something underneath.”

Genie wrung her hands together. “How can I tell?”

He grinned and she realized how handsome he was. The big brown eyes were gazing at her as though he found something worth looking at.

She felt her color rising. “What do I need to do?”

“Well, you better get back in your car, because it’s cold out here and that jacket doesn’t look near warm enough.” He gestured toward her car, tilted into the ditch. “Let me help you.”

He took her elbow, walked her to the vehicle, and opened the door for her.

She turned to gaze up at him. “I can’t thank you enough for helping me.”

He flashed another killer grin. “Don’t thank me yet. Let me see if I can get you out of here. Now, climb in out of the cold.” He closed her door and walked back toward his his vehicle.

All of her windows had immediately fogged up, so she turned on the defroster and rolled the front two side windows down and back up quickly to clear them.

Genie watched him return to his truck and back it up toward her rear bumper. What if he pulls the bumper off? What will I do then?

He dug around in a big tool box affixed to his truck bed, and dragged out a heavy chain with a big hook on the each end. He hooked one end on something under the front of his truck and had to layie down in the snow to hook the other end to some part of her car’s undercarriage. He climbed out, snow clinging to his jacket, and gave her a thumbs up before returning to his truck.

Genie gripped the wheel, staring into first one, and then another of her side view mirrors, but her rear window was totally frosted over.

She felt the car jerk when the chain was taut, but after that the car began moving backwards. Her car bumped back onto the pavement in reverse. She released a breath she hadn’t realized she’d been holding.

The man left his truck idling and came to unhook his chain. He stopped by her door and she opened the window.

“Thank you,” she said. “Thank you so very much. I—I have some money to pay you.” She reached for her purse.

“No, don’t even think about it. Which way are you headed?”

“I was going the same direction you were, but the car spun into the ditch.”

He nodded. “Try to turn around slowly, and if you’re able to steer, I’ll follow along behind you for a while to make sure you’re okay.”

Genie couldn’t believe how kind this stranger was. “Thanks again, Mr…?”

“Derrick. My name is Derrick Shelton.”

“Nice to know you, Genie. Now, be safe. Y’hear?” He grinned and gave her a two fingered salute off the brim of his cowboy hat, then climbed back into his truck. He waited until she very slowly managed to turn her car around and then fell in a comfortable distance behind her.

When she saw the odd horseshoe shaped gate, with the name Garrett emblazoned overhead, she turned off the highway, giving him a wave before she bumped over the cattle guard and entered the property.

He tooted his horn at her and went on.

For a moment, Genie felt abandoned and then lifted her chin a bit, knowing that somewhere on this road, she would find the answers to questions that had plagued her all her life.

This giveaway is now over. The lucky winner of the print copy is: Colleen C 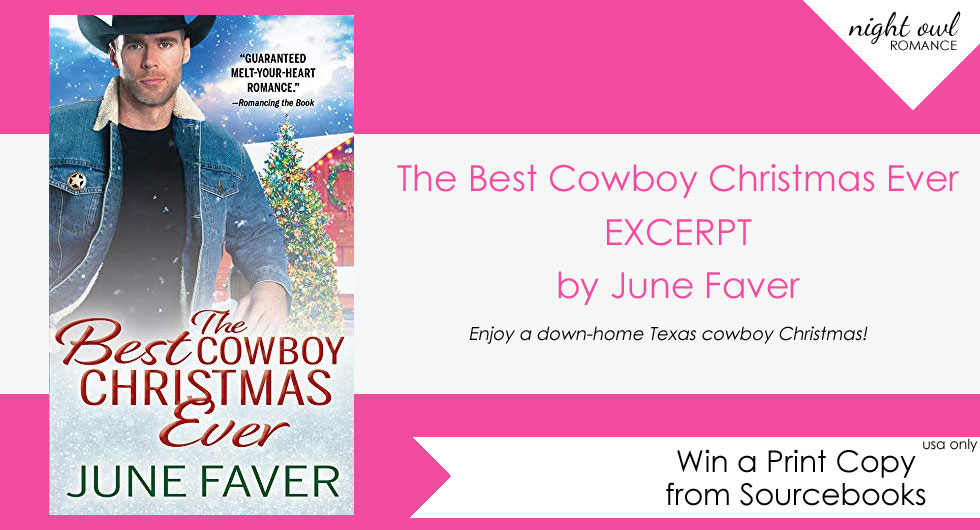