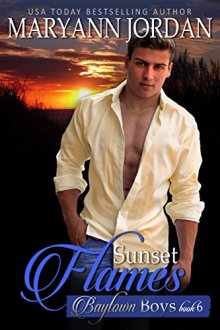 Military duty called them away to war zones, but after tours overseas, the group of friends found their way back home as men, seeking the peaceful little seaside town. Now, the band of brothers, together once more, work to provide a place for less fortunate veterans to call home.

Zac Hamilton, one of the original Baytown Boys, had returned from the Navy to become the Fire Chief for the small town. But, the Eastern Shore was gripped in fear as an arsonist continued to set fires all over the county just after sunset.

Madelyn Stover returned reluctantly to Baytown to bury her estranged father, but finding journals he had written left her wondering what secrets her parent’s marriage had held.

A fire on her property led Zac to the beautiful newcomer and as they grew closer, discovered they had more in common than either realized. When the arsonist strikes too close to home again, can Zac keep his promise to keep her safe?

Madelyn Stevens climbed out of her car but instead of closing the door, she stood rooted to the pea-gravel driveway, staring at the house in front of her. The structure sat in the middle of a large, wide yard, the grass scruffy and in need of mowing. A shed was visible to the left, next to the property line, by the fence posts that were leaning almost criss-crossed.

The dull ache in her chest blossomed and she reached her hand up to place over her heart, massaging slightly to relieve the pain. A gust of wind slapped her and she sucked in a great gulp of air before letting it out slowly.

Knowing there was no getting out of what needed to be done, she slammed the car door after bending to retrieve her purse. Her heeled boots crunched over the drive as she made her way toward the front door. Stopping at the bottom of the front porch, she cast her gaze over the entire structure.

The weathered, grey, cedar boards appeared sturdy and she had to admit that the blue painted shutters gave the house a nice appeal. At least he didn’t let the place fall down around him. Stepping to the front door, she reached inside her purse for the key she had been given. Placing it in the keyhole, she tried to steady the shakiness of her hand. Steeling herself, she swung the door open and hastened inside, immediately struck by a musty scent before the overload of what her eyes were taking in hit her.

“Oh, my God,” she breathed. The TV show about hoarders flooded her mind as her back hit the closed door behind her.

Tightly shutting her eyes for a moment, she cast her mind to the last time she was here. Too many memories began to assault her, so she popped her eyes open, refusing to give the conflicting recollections a place to roost. Straightening her spine, she stepped forward, her gaze moving from one side to the other. A pathway led between all the furniture and as she moved into the living room taking up the front of the house, she realized it was not as bad as she had originally feared. There were no piles of trash, uneaten food, old pizza boxes. No rats running around. Okay…so not like the hoarders on TV. And, to her surprise, no empty whisky or beer bottles lying about.

But what she was left with was the evidence of her father slowly collecting pieces of furniture over the years without having a place to put them. Chairs balanced on top of tables, some with a precarious perch on wooden chests. The piles of furniture reached six feet high in some places.

She remembered his penchant for scouring yard sells and antique stores. “Gotta dig deep to find the treasure, Maddie.” Being here, in this place, the words echoed in her ears as if they had been said aloud, causing a shiver to run over her. It had been many years since she last heard his voice and it surprised her how real they sounded.

Blowing out a breath, she walked through the living room and into the kitchen. Even though the living room was free of garbage, who knew what the kitchen would hold. A sigh of relief escaped when,once again, what she found was not disgusting, just crowded with furniture and bits and baubles. The counters were filled with antique glass jars and vases, with a small place carved out where he must have cooked and eaten. She remembered the spotless house her mother kept here. God, I’m glad Mom didn’t see this.

As an Award Winning, Amazon International Bestselling and All-Star author, Kobo, and Barnes & Noble Best Selling Author, I have always been an avid reader. In 2013 I started a blog to showcase wonderful writers. In 2014, I finally gave in to the characters in my head pleading for their story to be told. Thus, Emma's Home was created.

My first novel, Emma's Home became an Amazon Best Seller in 3 categories within the first month of publishing. Its success was followed by the rest of the Fairfield Series and then led into the Love's Series. Soon, other spin-off series came along and 8 of my books have made Amazon top 100 Bestselling books.

Honor Love was an award winning novel from the 2016 Reader's Choice Awards.

Serial Love was an award finalist novel from the 2016 Reader's Choice Awards.

Coming Home was awarded the 5 Star Review by the 2017 Reader's Choice Awards.

My books are filled with sweet romance and hot sex; mystery, suspense, real life characters and situations. My heroes are alphas, take charge men who love the strong, independent women they fall in love with.

I worked as a counselor in a high school and have been involved in education for the past 30 years. I have just retired and look forward to more time with family and writing!

I have been married to a wonderfully patient man for 36 years and have 2 adult, very supportive daughters.

When writing, my dog or one of my cats will usually be found in my lap!