Today we have historical romance author Linda Broday joining us to share some fascinating history on mail order brides.

Between 1848 and 1890, a large number of single women and widows headed west during the expansion period to fill the need for wives. At the time, there were 3 women for every 200 men so the prospect for marriage was slim. And for the women too, especially following the Civil War that sent thousands of men to their grave. The mail order bride business filled both needs.

Here are three real-life mail order brides and their stories:

Bethenia Owens began writing to Legrand Hill after he advertised for a bride in the Oregon newspapers in February 1854. She was only fifteen and courts required for her parents’ consent to marry, which they gave as they had eight other children. Legrand was handsome and broad-shouldered and she could stand underneath his outstretched arm. They began married life on 320 acres of farmland that he bought on credit but she soon discovered her husband and work didn’t agree and were evicted when they failed to pay the mortgage. She was pregnant and they began living with first one relative then another with Legrand leaving the responsibility of earning an income to Bethenia. She gave birth to their son less than a year after they married. Then she contracted typhoid fever and her parents moved her and the baby back into their home. When she recovered, she filed for divorce and went back to school to study medicine. In 1883, she became the first woman doctor in the state of Oregon and opened her practice in Clatsop County. She married Colonel John Adair in 1884 but it didn’t last either. She practiced medicine until she was sixty-five.

Twenty-two-year-old schoolteacher, Eleanor Berry, traveled west in 1873 to marry following three months of correspondence with Louis Dreibelbis who claimed to be wealthy. She was eager to meet him and wed. Not far from her destination of Virginia City, her stagecoach was held up and robbed. Though their faces were covered, she noticed a jagged scar on the back of one of the men’s hands. Upon reaching Virginia City, Louis’s landlady met her and took her to change into her wedding dress. She never saw her husband to be until she went down to the parlor and took her place in front of the minister. They said their vows and Louis kissed her. Then came the signing of the marriage license. When Louis signed his name, she noticed he had the same scar as the bandit. Eleanor screamed. He raced out, got on his horse, and rode off. Deputies caught up with Louis two months later. She returned home but was unable to deal with the horrible gossip and decided to commit suicide. Quick action by doctors saved her life and it’s unknown what happened after that.

Rachel Bella Kahn, a seventeen-year-old Russian servant girl, corresponded with a North Dakota Jewish farmer named Abraham Calof, then set sail to America to marry him in 1892. The moment their eyes met on Ellis Island, they knew the bond would last forever. They traveled by train to Devil’s Lake, North Dakota where his relatives met them. They were dirty and dressed in rags, her first clue about the hardships she’d face. Their home was a rustic 12x14 foot dugout. Upon exchanging vows, she learned they would share the place with his parents, his brother and his wife and two children. Abraham took Rachel on long walks and promised her this was all temporary. He had plans for better and was a hard worker. The first winter was a cold, harsh one and when the snow melted, they were happy to be expecting their first child. Abraham worked nonstop in the fields. At the end of their fifth year of marriage, they welcomed three more children. Then in four more years they’d increased their brood to seven. By 1910, the Calof’s owned 160 acres and were breaking wild horses as well as farming. Abraham became well-known for introducing improvements in agricultural practices and he and Rachel helped build the first school in the area. They had nine children in all, were married more than 50 years, and were recognized by Presidents William Taft and Woodrow Wilson. In 1936, she began writing her life story.

As you can see, some marriages worked, and others were definite mistakes. Marrying a stranger brought no guarantees but many, many women were willing to take a chance because they just might find something a lot better than what they had.
I’m enjoying writing this mail order brides series and the added outlaw element has sparked so many new ideas and characters. I hope readers will try Saving the Mail Order Bride.

When the West was wild

And man's law favored the few

These extraordinary women could be found...

He may be a wanted man, but all outlaw Jack Bowdre ever desired was a second chance. Now he's on his way to jail, completely unaware that his unexpected—and unexpectedly beautiful—traveling companion is none other than Nora Kane...his mail order bride.

It's too bad Nora doesn't know Jack is her groom-to-be. All she sees is a scoundrel. But when their stagecoach crashes and the truth comes spilling out, they're suddenly left to fend for themselves—and each other. The longer they're together, the stronger their feelings grow. Hounded by desperate men bent on doing them harm, Nora and Jack will do whatever it takes to find their happily ever after...but first, they'll have to shake the devil from their trail.

This giveaway is now over. The lucky winner is: Jan Tomalis 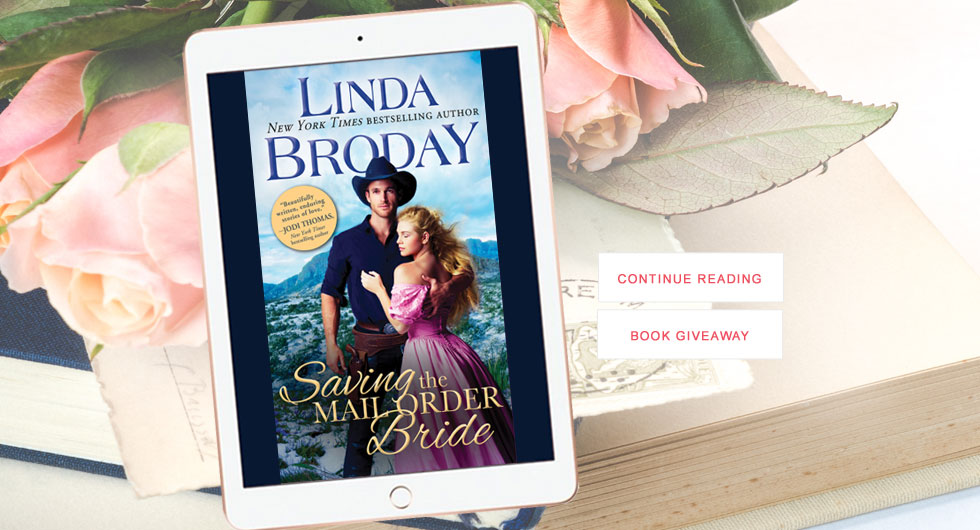