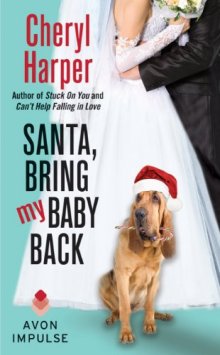 Win a copy of Elvis Presley: The Christmas Album! Entry below via Rafflecopter.

Today Cheryl Harper is touring her holiday romance and readers get an excerpt!

Santa, Bring My Baby Back

A bride abandoned at the altar . . . just in time for Christmas? 'Tis the season for second chances at Cheryl Harper's Elvis-themed Rock'n'Rolla Hotel.

After trying and failing at acting, modeling, dog grooming, and a dozen other jobs, Grace Andersen thought for sure she'd nail marrying a rich man. But dumped in a hotel chapel and strapped for cash, Grace needs a miracle-and a job.

If it were up to Charlie McMinn, Grace would be a married lady by now. Officiating weddings in gold lamé and a rock star pompadour may not have been his idea of getting into the holiday spirit, but with a gorgeous bride asking for his help, Charlie doesn't mind sticking around his mother's hotel a few more days. Especially if it means getting Grace settled …

Grace isn't sure what to think of sexy, rugged Charlie, except that she can't deny the attraction between them, or how good it feels to finally fit in somewhere. Is she ready to give a certain place-and a certain someone-a real chance? Or will she abandon a true Christmas miracle?

All the way around the pool area with its cheery inflatable snowmen and flashing candy canes and down the long hallway decorated with album covers and three different themed Christmas trees, Grace rehearsed her lines in her head. She was going to need a job, a place to stay, and some time to pay her hotel bills. Checking all three off the list might take some finesse.

Grace paused in the doorway of Viva Las Vegas to give her eyes a chance to adjust to the change from the bright lobby to the darker restaurant. Her first impressions were of lush plants—a theme at the hotel—and some rocking Elvis tune competing with the clinks of silverware on plates and low conversations. A very cute, very young hostess dressed as a showgirl in Santa’s workshop pointed her toward the bar. When Grace dumped all her baggage in a seat and draped the dress over the top, she noticed Charlie, but he didn’t look up from his plate.

Thanks to his concentration, Grace had a chance to observe him before she announced her presence. His crisp white dress shirt and black tie were covered by a large cloth napkin, which might also be a tablecloth in real life. She appreciated his broad shoulders and the flex of muscles in his back as he twisted on the seat. The edges of his sleeves were white flashes as he made steady progress of clearing his plate with quick bites, not like he was in a hurry, but took pride in efficient operation. And his long legs were propped up on the brass footrest that ran along the bottom of the bar. His slicked back black hair was probably the stillest part of his body. Charlie seemed capable. Strong. Solid. For some reason, she had the urge to wrap her hand around his arm and maybe rest her head on his shoulder.

Not exactly what she expected from a man with rock-star good looks and enough gunk in his hair to preserve his style in a tornado.

She patted her own, slightly crunchy updo and decided to give him props for that. It showed commitment.

When he’d opened her dressing room door, the first thing she saw were his dark brown eyes. For a minute, she’d been frozen by the connection. Then she’d noticed his Elvis-like hair and had to wonder what his story was.

Whether she's writing, reading, or just checking the items off of her daily to-do list, Cheryl Harper loves her romance mixed with a little laughter. When she's not working, you will find her ignoring housework, cursing yard work, and spending way too much time with a television remote in her hand.