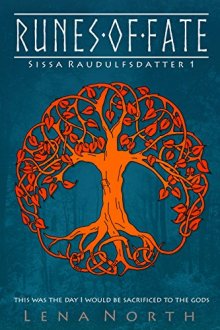 It's the annual midwinter gathering, and Sissa Raudulfsdatter is locked into a shed – bound, gagged and waiting to be led out to the altar where she will be sacrificed.

There has never been any human sacrifice in the village before, but this year Jarl Ingolf decided that the gods require one to give their good graces back.

Sissa is determined to face her fate with dignity and courage but as she waits for them to bring her out to the altar, the herbs her mother has put in her final meal makes her dizzy and finally, she faints.

The morning after the sacrifice she wakes up, still alive and still in the shed. After shouting for help, Sissa's brother opens the door, but he's shocked to see her because they all thought Sissa was killed the evening before. It's soon discovered that another girl was sacrificed instead. The village is in uproar and Jarl Ingolf, who performed the sacrifice himself, is devastated.

The Jarl’s brother, Einarr, is given the task to find out what has happened and because of her ability to figure things out, and since she's the only one clearly innocent, he asks Sissa to help him. One of the suspects is Einarr’s only son Josteinn, the boy Sissa has had her eyes on her whole life, but there are others who could be guilty, and as Sissa and Einarr learn more, things start to become dangerous.

When Josteinn starts to pay her attention, Sissa has to decide how she wants to live her life. Can she be content living her life in the village as Josteinn's thrall, his property? Or have the gods carved different runes of fate into the roots of Yggdrasil for her?

"Things have changed, in a way I never expected, but now I have to plan for what to do. It can not come as a surprise to you that I want my son to be the next Jarl under the current circumstances. I never wished for Heidrun's death, and Steinar is a good man, but Josteinn is too."

Einarr stopped talking and I looked down at the snow on the ground. I didn't know what to say, and I didn't want to hear about his plans and ambitions. He was a hard man, and I knew that he could be as ruthless as Jarl Ingolf but in a different way. When he spoke next, he surprised me.
"I am not without honor, Sissa. I want my son to be Jarl but he needs to become Jarl the right way. It should be because he's strong and clever, not because he arranged to have his cousin killed. If you find that Joss was involved, then all I ask is that you tell me first. Let me deal with my son myself."

I turned toward him, too astonished to even speak, and I felt my eyes widen slowly as we looked at one another. He had a soft look on his face that I wondered if he ever showed anyone.

The proper way to put it here would probably be to describe how I love to play with our two big dogs, adore my fantastic daughters and how much I love to read.

Another way would be to use my imagination and then I would be a super powerful warrior woman, think Xena the warrior princess (though with less tacky clothes). Or when I think of it, maybe I'm actually more of a Hercule Poirot (sans the suit and moustache). Or maybe I'm like Aragorn, strong and cool and then I might get to meet Gandalf! Or I could be Bella's pretty cousin and snap Jacob up in a second (yeah, I'm so not team Edward), or wait, maybe I could be like one of them heroines in historical novels who swoon all the time. I've always wanted to swoon…

Well, I guess you get how my mind is working (or not working, some say). Anyways, I like to write. Stories, adventures, romantic and happy stuff mixed up with sorrow and hardship, and bit of laughter here and there because the way I see it – life is way too short to go around feeling grumpy.