This past October, I had the pleasure of traveling to Scotland with two of my dearest friends, who also happen to be writers. Nine days of excitement and adventure! We stayed in Edinburgh for a night, then in Aberdeen for a week, and Glasgow for our last night.

I love hiking. In fact, whenever I travel, I like to see if there are any hiking trails around, and I try to go on at least one. There is something so magical in exploring nature. The sounds, the smells, the quiet. It relaxes me and invigorates me all at once. So, naturally, one of my favorite days while I was in Scotland was when we went for a 6 mile round-trip hike from the town of Stonehaven to Dunnottar Castle. We started our walk down on the beach, crossed through the town, and up a rise. The rise was had its ups and downs, and flat paths, all of which overlooked the sea below. We couldn’t have chosen a better day. While it was a little chilly, the wind brisk, the sun was out, and we couldn’t stop commenting on the freshness of the air, the salty smell of the sea or the tranquility of the walk. Of course, I also imagined what my characters would have experienced, letting all of my senses come alive. What would it have been like to walk across the rise, to see that massive, impenetrable castle in the distance?

As we walked the 3 mile trail up and across with the water lapping down below, Dunnottar Castle came into view, growing closer and closer. At first, we’d thought it was one peninsula point, only for it to appear on the next, a trick of the eye.

At last, we arrived at the castle, hiking down at least 100 stairs and commenting sarcastically that walking up was going to be a breeze, which it wasn’t! LOL!

The castle was a typical medieval fortress, with a tower keep, gatehouse, outbuildings for the soldiers, a kitchen, stables, a chapel, and then some newer, grander buildings from later in the years. While Dunnottar had the same sort of views one normally experiences at a medieval castle, there were two things in particular that stood out the most to me. One, was the lion’s den. Yes, a lion’s den! The Earl Marischal kept a pet lion in the castle. However, it is said that the lion didn’t last long, as his roaring kept the countess up at night, and she demanded it be removed. I think if I were her, I would have demanded its removal because I didn’t want it to eat me… I’m certain back in the time the lion resided at the castle, there must have been a more formidable cage of sorts, but still… That’s awfully close to wear they were sleeping!

The second thing I fell in love with, was the amazing views from the gun holes. The water was so clear and blue, the cliffs mesmerizing. In fact, I stared out this particular window for a good ten minutes (and many others for the same amount of time!) imagining being a part of that castle so long ago. Hearing the sea crashing against rock, seagulls crying out, the wind blowing gently, the lapping of the waves at the shore—all of which my characters might have heard—was incredible. It was a huge inspiration for the sounds and sights my Highland pirates and their ladies experienced, and I’m certain I’ll use the experiences for many more stories to come!

I hope you enjoyed this little journey with me! If you want to see more of my pictures from Scotland, including some videos I took while there, follow me on social media.

The Sea Devil - Pirates of Britannia: Lords of the Sea Book 3

Book Three in the new Pirates of Britannia: Lords of the Sea series!

A daring brotherhood, where honor among thieves reigns supreme, and crushing their enemies is a thrilling pastime. These are the Pirates of Britannia.

Thornley "Thor" MacLeod, Captain of The Sea Devil and prominent member of the Devils of the Deep is out for one thing and one thing only--revenge against Santiago Fernandez, leader of Los Demonios de Mar. Tormented by the demons of his past, he knows the only relief to his pain will be spilling the blood of his enemy. When he learns that Santiago seeks to find a child he abandoned nearly two decades before, Thor is determined to find the precious treasure first. Which means, Thor may have to sacrifice his honor in order to exact the perfect vengeance.

Orphaned at a young age, Alesia Baird has grown up along the harsh coasts of Scotland, bearing witness to many a nightmare. With the hangman’s noose dangling ever closer to her neck, she has to find a way to escape the only life she’s ever known. When she overhears a pirate mention he seeks the child of Santiago Fernandez, Alesia takes the leap, knowing this could be her only way out.

Alesia must keep up the ruse long enough to escape with her life, and perhaps a sack full of jewels. But when it comes time to jump ship, she finds her destiny may have led her in a different path. Will the hardened Highlander allow a lass into his heart—or is she destined to be forever alone?

NOTE: Book One in the Lords of the Sea pirate series is SAVAGE OF THE SEA by Eliza Knight. Book Two in the series is LEADER OF TITANS by Kathryn le Veque. All books are stand-alones but much more fun if read together!

Eliza Knight is an award-winning, USA Today Bestselling author of Scottish romance. Under the name E. Knight she pens rip-your-heart-out historical fiction. Eliza lives in Maryland with her own knight in shining armor, three princesses and one naughty puppy. 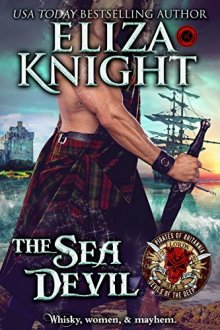