1. Sam Elliott. My guess is Sam tops many Top 10 Cowboy lists. He’s the perfect combination of good looks, grit, humor, and a voice that could melt an iceberg.

2. Paul Newman. Sure Robert Redford was all that and more as the Sundance Kid, but Paul Newman as Butch Cassidy . . . there was just something about those blue eyes, and his smile that simply outshone the Kid.

3. Clint Eastwood. Rawhide, Unforgiven and everything in between, including all those “spaghetti westerns,” Clint was the epitome of the word cowboy.

4. James Arness. Growing up in a small town in upstate New York, where there were exactly three television stations, all of which went off the air after the eleven o’clock news, Tuesday nights were all about Gunsmoke.

5. Steve McQueen. He was the man in Magnificent Seven, and everything else he was ever in.

6. James Garner. Bret Maverick never met a card game or a con that he didn’t want to be part of, but he still won our hearts with his cowboy way.

7. Jack Palance. I don’t know which I liked more . . . every scene he was in, in the movie City Slickers, or the pushups he did at the Oscars.

8. Michael Landon. Was there a girl alive that didn’t have a crush on Little Joe Cartwright?

9. Brad Pitt. Legends of the Fall. Need I say more?

10. John Wayne. The Duke probably should’ve been number one, but no matter where he falls on the list, John Wayne was the ultimate cowboy in so many of his movies.

My books are filled with things that bring me joy: music, wine, skiing, families, artists, and cowboys. Not always in that order.

I’m an Amazon best-selling author, and a PAN member of Romance Writers of America. I speak, teach, blog, am an executive sommelier, and all-around entrepreneur.

I grew up an east coast girl, and then spent half my life on the west coast. Now my husband, our two boys, and I happily call Colorado home. 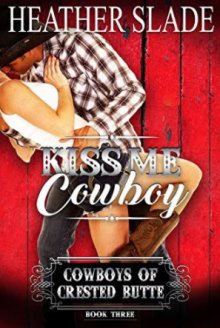