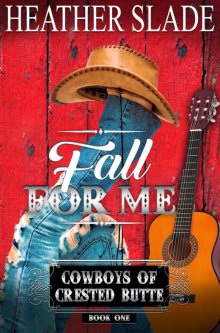 First Chapter: Fall for Me by Heather Slade

Today we have a lovely contemporary romance to share with you. Author Heather Slade has provided us with the first chapter in her book "Fall For Me". This book starts out her new Cowboys of Crested Butte series.

Fall for Me - Cowboys of Crested Butte Book 1

Fate put her in his path, and he has no intention of ever letting her go.

Olivia Fairchild gave up her dream of being a competitive barrel racer at nineteen, to follow her first love wherever his life as an F15 pilot took them. When his plane was shot down months later, right before the birth of their daughter, Liv’s world shattered. She returned to her parents’ isolated ranch in Colorado to raise her daughter alone. One year led into the next, and before she knew it, her daughter was grown and gone—leaving Liv bored and cranky. She finds herself spending too much time on social media feeds, cyber-stalking the hot guitar player she met at a concert over the summer.

Ben Rice recognized her as soon as he saw her sitting at the bar. Liv, that was her name, and fate kept bringing them together. The first time he saw her, after his band CB Rice opened at Red Rocks, he watched her. She loved music—and she felt it. Not everyone did. She danced, she laughed, she smiled, she lived. That was why he remembered her name when he introduced himself at the end of the show. “I’m Liv,” she’d said. And he was ready to. He’d endured too many struggles in the last few years. He’d worked hard to keep the band going, and he wasn’t going to give up. With a new record about to be released, this was their year—he could feel it.

Used to getting what he wants, Ben pursued the reluctant Liv. But knowing he wanted more from her than she was willing to give, she told him following a man around the globe wasn’t in the stars for her. Been there, done that, retired the t-shirt. She had her own stars to chase this time.

When those stars fall around her feet, and Ben refuses to let her sweep them up alone, how could a girl not love him? And when she does, how can she let him go? A better question is how can she ask him to stay when she sees how bright his future could be without her?

This is book can be read as a standalone with no cliffhanger.

Liv raised her arms and swayed as the warm breeze of the Colorado night danced and swirled around her.

Sitting in the sixth row of the outdoor amphitheater, she closed her eyes and sang along, as the opening band played her favorite song.

I don't wanna play it cool

Ain't got me all jumbled up inside.

I don't want to play along,

Dance with you for just one song,

Then politely step aside.

Let's don't let go of this

I don't wanna move too fast

If I let this moment pass

May never get the chance again.

Tomorrow I will either be

Tangled up in you and me

Or lost in thoughts of what could have been.

"Open your eyes," her best friend, Paige, whispered. "He's singing to you."

When Liv opened her eyes, CB, the lead singer of the band CB Rice, was looking right at her. When she smiled, he nodded and smiled too.

"Let Liv enjoy this moment and don't be such a brat, Blythe."

The people behind them leaned forward."Shh..."

Blythe turned around."You want us to be quiet during a rock concert? Seriously?"

In my mind I've already let this go too far

Let's don't let go of this

The song ended and Liv wished she could hit replay, like she did so often when she listened to their music. It was as though the words of every song were written just for her. She'd never forget this night, finally having the chance to see them perform live.

"Playing Red Rocks has always been our dream," CB told the cheering audience.

Every band she'd seen at the spectacular venue nestled into the mountains outside of Denver had expressed a similar sentiment.

From the stage, rows upon rows of wooden benches led up to a vast and open view of starry Rocky Mountain nights.

"Ready for a beer?" Paige asked.

"Sure. Why not?" Liv smiled. She'd insisted they rush to their seats when they arrived, so she didn't miss a single minute of CB Rice on stage.

"We're going to look at merch," Renie told her mother, pulling a pouting Blythe behind her.

"All the years they've been friends, you'd think Renie's personality would've rubbed off at least a little on my daughter."

Liv started humming the last song the band played, wishing again she could hear it one more time.

"You should get a t-shirt," Paige teased.

Two beers and one of every t-shirt CB Rice was selling later, Liv and Paige returned to their seats just as the second band took the stage.

Their seats were situated just outside the roped-off area that was designated both for VIPs, and for the sound equipment. When Renie came and sat beside her, Liv leaned against her daughter.

"Thank you for doing this, " Liv answered.

"I know how much you like Red Rocks, and with three of your favorite bands playing, it seemed like the perfect way to end our summer."

Her daughter was a pre-med major at Dartmouth, and would be returning to school next week.

"I miss you already, sweetheart."

The second band began to play, and soon everyone in the ten-thousand person audience was on their feet, dancing and singing along.

She looked up at the large rock formation, expecting to see something projected on it. "What?"

"Not up there. There." Renie pointed again to the VIP area, where CB and his band were seated.

When Liv looked over, CB was looking right at her, just like he had been while onstage. Warmth traveled up her cheeks, and she looked away. A few minutes later, she looked back. His eyes still rested on her, this time he smiled and winked.

"Hey, you." Paige smiled when Liv scooted closer, putting Renie and Blythe between her and the ropes.

"He's been staring at her all night, " Blythe groaned.

"Shh..." the people behind them whispered again, which only made Liv and Paige giggle.

When the second band's set ended, Liv sneaked a peek at the VIP area, disappointed that she didn't see any members of CB Rice.

"You were ignoring him, so he went home, " Renie smirked. Liv rolled her eyes.

Soon the third band took the stage, and the audience went wild. Liv forgot all about CB and his band, as she danced and sang along for the rest of the two-hour show.

Too soon it seemed, the band played their encore, and the audience slowly began making their way to the exits.

When Liv turned around, CB was standing right behind her.

"Liv," she answered, and then turned back around. "And this is my friend, Paige, my daughter, Renie, and Paige's daughter, Blythe."

He bent to see around Liv."I'm Ben Rice. Nice to meet you. "He waved, and then rested his gaze back on her. "Thanks for coming to the showtonight, Liv."

"Nice to meet you. "Paige waved and followed Liv, who was already beyond the end of the row, near the exit.

"What has gotten into you? "Paige asked when they got in the car.

"You weren't very polite to him, Mom."

"What are you talking about?"

"He was flirting with you."

"Don't be ridiculous, "Liv murmured, and turned up the volume on the stereo.

My books are filled with things that bring me joy: music, wine, skiing, families, artists, and cowboys. Not always in that order.

I’m an Amazon best-selling author, and a PAN member of Romance Writers of America. I speak, teach, blog, am an executive sommelier, and all-around entrepreneur.

I grew up an east coast girl, and then spent half my life on the west coast. Now my husband, our two boys, and I happily call Colorado home.