Do you have a need for speed? If so, Katie Golding has a novel for you. Plus you can win a print copy.

He's got one last chance
To make things right

Billy King may be smiling under his black Stetson, but the plain truth is this cowboy-turned-racer is hurting: for his horse back in Memphis, for his girl with one boot out the door, and for his faltering career thanks to an injury that's not getting any better. The moment he's free from the press circuit, Billy bolts home—resolved to heal, and ready to win Taryn's heart a second time.

Hopefully, before the love of his life is gone for good.

Taryn Ledell never wanted to fall for sweet blue eyes and a deep southern drawl. As a World Superbike racer, she had plans, and none of them involved playing second fiddle to any man. But now he's back, and she's forced to make some hard choices. With her sponsors eager for a decision, Taryn finds herself tangled in all the lines they've drawn in the sand. But broken bones and broken hearts don't heal overnight, and the cost of forgiveness can be sky high: unless Billy can prove that his heart never left the ranch...or her.

I never should’ve looked back.

Billy was already up in his saddle and trotting Gidget toward me, catching up. “I don’t ride bulls no more. I swear it.”

I scoffed, still walking Aston toward the pens. I didn’t even care to act gracious or charming or any of that fake stuff anymore.

All I could think about was the scent of his cologne mixing with my fabric softener. I hadn’t been laid in months. “Bullshit. Bull riders don’t stop until they’re too old or too broken to keep going.” I gave him a quick once-over.

“You’re neither of those things.”

I stopped Aston and looked over, my curiosity regrettably piqued. “You an elementary school teacher or something?”

He laughed, the sound pure and crystalline. No man should be allowed to laugh like that. Especially when he could throw calves like they were feather pillows. “No, ma’am. I’m a motorcycle racer.”

I didn’t know what that meant. He wasn’t on the Superbike circuit with me, but the fact that he even mentioned a motorcycle…

The devil was whispering all my favorite words.

I urged Aston on, resolute to keep my cool. Just because he was also from Memphis, roped like a god, was sweet to his horse, and apparently rode a motorcycle for a living didn’t mean meeting him was destiny. Chances were I’d never see him again. “That right?”

He guided his horse around a group of people stopped in the middle of the aisle. When he came up beside me, he tipped his hat a little farther back so his face wasn’t as shadowed. God, he was cute, with one of those iron-sharp jaws that always felt really, really good in your hands.

“It’s kinda like Formula 1,” he said, “but with motorcycles instead of cars. And my contract with Yaalon, well, it says I can’t ride bulls anymore. My brother Mason can, but he’s with Blue Gator on a satellite team.”

My brow furrowed. As a Superbike racer, I knew plenty about the Moto Grand Prix circuit. But the last thing he said didn’t seem right to me. My contract with Munich Motor Works had all sorts of provisions, but MMW never said anything about me barrel racing when I was home. “How come?”

“How come Mason can ride bulls and I can’t?”

He shrugged, no stress in the movement or twitchiness to be found. “Don’t know. Probably because he’s better at it than I was.”

Another thing that didn’t sound right. Bull riders were famous for their egos. “You ever miss it?” I tested.

“Hmm, sometimes, I guess. It’s a hell of a rush. But I get that from racing now, so I don’t mind giving it up.” He sounded totally sincere as he smiled at me and said, “Besides, I got too much to lose.”

I cocked an eyebrow at him. “In all my life, I’ve never heard a bull rider say that.”

“Well, I told you: I’m not a bull rider no more.” He winked at me, and Lord, if he was telling the truth? I was in so much trouble.

“And hey, since I’m not, you wanna be my date to the Mutton Bustin’ tonight?”

I burst into laughter, no idea why my heart was jumping to agree and even my overly critical brain was struggling to refuse. “No?”

“Why not?” He’d still never lost his grin, drifting his horse closer until his leg bumped mine, sending a zing through my veins that hit me straight between my thighs. “It’ll be fun, cheering on all those little kids climbing up there to ride their first sheep. And I hear after, they’re gonna have a dance for the big kids. And I’m a great dancer.”

I couldn’t make myself stop smiling as I walked Aston up to her designated pen, then got down from the saddle, tying her lead and endlessly debating.

I had hard and fast rules about dating bull riders. But Billy said he wasn’t a bull rider anymore. Plus, it was so sweet that instead of asking to take me out to a bar, he wanted to watch toddlers try to ride sheep. Where the families were.

I turned around, finding him down from his saddle and standing a comfortable distance back from me, absently petting the underside of his horse’s jaw. “I promise to get you home at a decent time. And I won’t try nothing. I just…want to dance with you. If that’s okay.”

His drawl was slaying all my defenses, husky and deep and rumbling beneath black cotton fabric doing its absolute very best to stretch across the broad expanse of his upper muscles.

His arms were bigger than I’d realized, too. I bet with one solid flex of his biceps, the seams would be forced to rip apart.

How awful for that poor, innocent shirt.

Get a grip, Taryn.

“I don’t…know you,” I said, because I honestly couldn’t think of anything else to say.

The dancing part didn’t sound too bad, and it had been forever since I’d been on a real date with a guy and not just hooked up.

Even longer since I’d been on a date with a nice guy. I wasn’t sure they existed anymore, truthfully. And I was tired of being disappointed when they all turned out to be after the same thing, which definitely wasn’t my brain. It wasn’t even my damn bike.

He was so disarmingly kind but still confident enough to ask for what he wanted—and in that Stetson blacker than any lingerie I’d ever dared to buy.

He nodded to himself, taking a small step closer and slipping his hat off his head. My eyes widened a bit at the shock of sunny blond hair, seeming to match so much better with the gentleness in his baby-blue eyes. “Well, I’m trying to fix that, Taryn. If you’ll let me.”

I knew better, and I never should’ve looked back.

This giveaway is now over. The lucky winner is: Kathryn Plitt 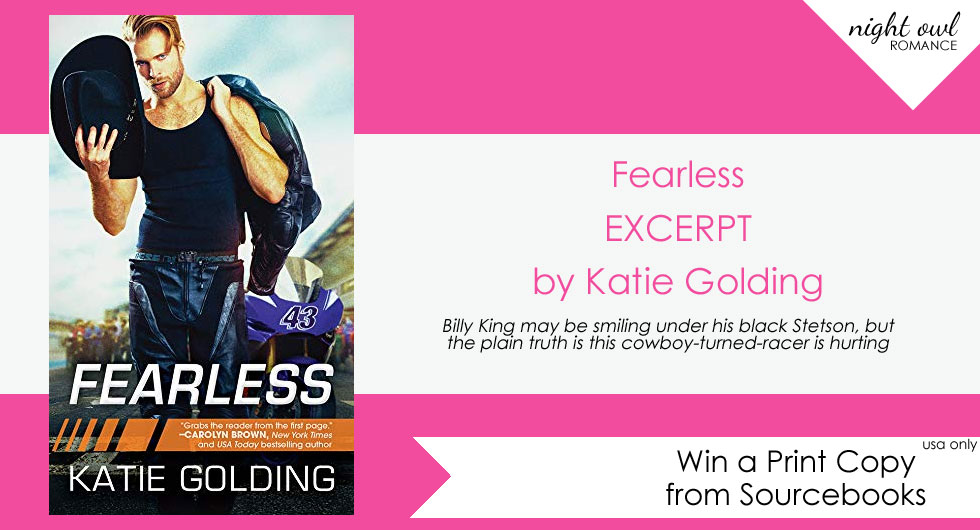