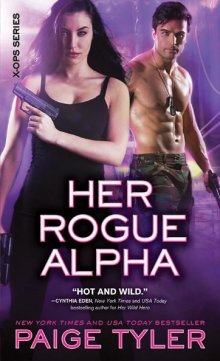 Author’s Note: The below excerpt is a conversation between the hero, Jayson Harmon, a wounded Special Forces lieutenant, and the deputy director of the Department of Covert Ops, Dick Coleman. While readers (and almost everyone in the X-OPS Series) knows that Dick is always up to no good, Jayson, who is in a bad place in his life right now, sees a different side to him (or at least believes he does). So, when Dick offers Jayson a way to get back everything he lost when he was wounded in Afghanistan, he doesn’t realize the deputy director is using him to get what he wants. While the experimental serum Dick wants him to take could make Jayson practically superhuman, it’s also beyond dangerous.

HE'LL DO ANYTHING FOR HER

Former Special Forces Lieutenant Jayson Harmon can't believe that his war scars don't matter to beautiful feline shifter Layla Halliwell. Why would she saddle herself with a broken man?

But Layla knows that Jayson is a hero to the core, and that only she can heal his wounded soul. So when Jayson is deployed on another deadly mission, no way is Layla staying behind...

There were days having a job involving open access to loaded weapons didn’t seem like the best thing for a guy like him. All he had to do was pick one up and put it to his head…

Jayson determinedly pushed those thoughts aside, refusing to let his mind even go down that path. He knew from experience—in his first few months after coming back from Afghanistan—that depression was a self-fulfilling prophesy. The more you thought about how shitty things were, the bleaker things looked.

He finished cleaning the Beretta and moved on to the other weapons that had been used this morning. He kept everything carefully segregated as he pulled off the slides and took out the various parts, checking each piece for damage and unusual wear marks as he did so. He was so lost in the rhythm of it that he didn’t even realize someone had come into the building until he heard the sound of footsteps on rough concrete. He looked up and saw Dick Coleman, the DCO’s deputy director, standing there.

“Thought I’d find you here.” Dick smiled, nodding at the disassembled weapons on the table. “You want some help with these?”

He didn’t wait for an answer. Instead, he took off his suit jacket and draped it over the back of a nearby stool, then rolled up his sleeves and began cleaning one of the Colts. Jayson wasn’t surprised. While Dick might be the second most powerful man in the organization, he was easy to talk to and always willing to lend a hand as well as an ear. The guy was a good thirty years older than Jayson and had the gray in his hair to prove it, but they never had a problem finding something to talk about.

Dick held one of the .45 barrels up to the light to inspect the chamber area, his gray eyes narrowing as he checked it for wear. “I didn’t notice you in the cafeteria for lunch, so I thought I’d come down and see how you’re doing.”

“I wanted to get these cleaned up first,” Jayson said. “I was planning to go up later to get something.”

One look at Dick’s expression told Jayson his boss knew he was full of crap, but the older man didn’t call him on it.

“You spend too much time down here by yourself,” Dick said. “I appreciate all the work you do for us, but no one expects you to work your fingers to the bone, you know.”

How could he tell his boss that he didn’t like going to the cafeteria during the normal rush because he hated the idea of everyone watching him slowly shamble across the room with his tray?

Dick picked up another barrel and ran a bore brush through it. “I see the lessons you’re giving Layla on that SIG Sauer she’s partial to are really paying off. She looks great on the training exercises.”

Jayson grimaced. Layla’s training was a love/hate issue for him. He wanted her to succeed, but it also reminded him that she was moving toward a life he could never be part of. Knowing she was doing things he used to be able to do and couldn’t do now was hard as hell. He knew it was shallow and petty, but knowing that didn’t change the way he felt.

Jayson hadn’t been the one who’d taught Layla to shoot though. As much as it hurt to think about anyone other than him teaching her anything, at the end of the day, he was proud of her and everything she’d accomplished. He wouldn’t dream of trying to take credit for it.

“If you say so.” On the other side of the table, Dick didn’t look convinced. “You know, when John told me that Layla was going to train to be a field agent, I thought it was a mistake. Even if she is a shifter, she’s still a psychologist, one with nothing in her background to even suggest she’d have the skills to be an operative. But I was wrong. She’s learning faster than almost anyone I’ve ever seen. In fact, I heard John mention she’ll be going on a mission soon.”

Jayson almost dropped the lower frame piece he was working on. Of all the things Dick could have said, that was the one thing Jayson least wanted to hear.

While he was thrilled for her, he couldn’t stop the nagging voice in the back of his head that kept reminding him that once Layla proved herself ready for full- time fieldwork, she’d be one step closer to the very worst part of this whole deal— getting a partner.

No matter how proud of her he was, he was never going to be happy about her going into the field with someone other than him. It would almost certainly be a man because all the female shifters were paired up with guys who were ex- military or ex– law enforcement. Jayson tried not to be jealous and failed miserably— mostly because he knew how close DCO agents had to get to do their jobs. That’s how his former A-team commander-turned- DCO-agent Landon Donovan and his partner Ivy had ended up married, even though no one in the DCO “officially” knew it. Wolf shifter Clayne Buchanan and his fiancée Danica Beckett had gotten together as a result of some mission to hunt down a serial killer in California, while Declan and Kendra MacBride had fallen in love while on the run from crazed hybrids in the rainforest of Costa Rica. Heck, even Angelo Rios, another former Special Forces guy, and his quiet hybrid partner, Minka Pajari, had gotten seriously close during their first mission in Tajikistan.

The thought that Layla would be out there spending a bunch of time with another man—laughing, bonding, and probably realizing she was wasting her life with him—just about tore out his guts.

On the flip side, Jayson also worried that Layla would end up with an asshole partner who wouldn’t watch her back— like Powell or Moore. If she was paired with one of those idiots, he’d never be able to sleep again.

“What kind of person do you think Layla would match up well with?” Dick asked, as if reading his thoughts. “As a partner in the field, I mean.”

Jayson’s grip tightened on the slide as he tried to breathe through a pain in his chest that hurt more than any back spasm ever could. Asking him which man he thought would be a good partner for Layla was a question he couldn’t— wouldn’t— answer.

If Dick noticed his reaction, he didn’t mention it. “Personally, I think the two of you would make a great team.”

Another spike of pain stabbed him. He swallowed hard. “Yeah, well I don’t think that’s ever going to happen.”

Dick glanced up from the spring he was meticulously cleaning. “But what if it could?”

Jayson frowned. “What do you mean by that? You know how screwed up my back is.”

Dick shrugged and went back to cleaning. “Some of our doctors have been working on a serum that might be able to repair the damage.”

Jayson froze. His heart began thumping harder even as he told himself to be wary. “You mean a hybrid serum?”

“Basically, yes. But it’s nothing like the stuff that was used on Tanner and Minka,” he added quickly. “While the basis for this new drug is the hybrid serum we’ve been studying, our doctors have refined it. They’ve eliminated the negative side effects, like the rage, and have optimized the serum so that the person who takes it gets the strength, speed, and healing abilities of a shifter without any of the more extreme physical attributes, such as claws and fangs.”

Jayson stared at him, afraid to believe what he was hearing. If what Dick said was true, a serum like that could heal his injuries. “And this stuff is safe?”

Dick nodded. “Absolutely. It’s already gone through a thorough review and animal testing. Now that we’re ready for human trials, I immediately thought of you.”

Jayson’s first instinct was to say hell no. He didn’t like being the crippled guy everyone stared at when he walked down the street, but he wasn’t crazy enough to voluntarily take a drug that might kill him. He’d heard what the hybrid serum had done to Tanner Howland and Minka Pajari. Besides having to fight the animal inside them for control every day, they were also subject to violent rages. He didn’t want any part of a drug like that. But as Dick went on to explain how thoroughly the new serum had been tested and how it wouldn’t merely heal the damage that fucking RPG had done to his back, but also help him get back to the man he’d been before—maybe a little better— Jayson found himself considering it.

“At least think about it,” Dick suggested when Jayson didn’t say anything. “I won’t lie and say there aren’t any risks involved here. But you’re a soldier and you understand that sometimes you have to take some of those risks. Look me in the eye and tell me that the possibility of you walking without pain stabbing you in the back every time you take a step or covering Layla’s ass in a firefight on a mission—hell, maybe even picking her up and carrying her across the threshold someday—isn’t worth a little risk?”

Jayson couldn’t tell him that. Because when Dick put it that way, of course the risk was worth it. But there was also the minor fact that something could go wrong when he took the drug. Then there wouldn’t be any issues with back pain or covering Layla’s ass in a firefight or carrying her across a threshold either. Because he’d be dead.

More In The Series

Paige Tyler is a full-time, multi-published, award-winning writer of erotic romance. She and her research assistant (otherwise known as her husband!) live on the beautiful Florida coast with their easy going dog and their lazy, I-refuse-to-get-off-the-couch-for-anything-but-food cat. When not working on her latest book, Paige enjoys reading, jogging, doing Pilates, going to the beach, watching Pro football, and vacationing with her husband at Disney. She loves writing about strong, sexy, alpha males and the feisty, independent women who fall for them. From verbal foreplay to sexual heat, her wickedly hot stories of romance, adventure, passion and true love will bring a blush to your cheeks and leave you breathlessly panting for more!