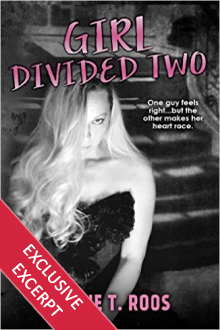 Join us today as we share an exclusive excerpt to Suzie T. Roo's second book in her Spoken For series.

As an author, it’s not always fun and games when writing a novel.

We have those scenes we hate to write. Yes, we don’t always love every scene in our books. I know for myself, I want to root for my characters more than anyone. So, when my characters force a different path than happy-go-lucky one, it’s hard. When I write a game-changing scene it takes a lot out of me.

When one of those scenes wasn’t part of the original plot I take a deep breath and let my characters guide me. I hate when it needs to be done.

The provided excerpt below is in Zach’s POV—he’s one of my “heroes.” The excerpt is one of those scenes for me. The scene turned out to be a total game changer in the novel. I didn’t realize it was going to happen that way. I initially sat down and wrote a scene where Zach asks his Gramps (a Mob Boss) to provide extra security for the girl whom he has “spoken for”—Tatum. As the scene progressed, the plot veered down a different road. I went with it, what’s the worst that could happen . . . I have to hit delete? With each word typed I could feel my breathing escalate. I kept pushing and, when the scene ended, I was emotionally exhausted. I gave birth to a massive conflict! It had to be done.

Besides getting an Italian guy’s mannerisms accurate, I made it more difficult for my hero and heroine to be together. That sucked. Again, it honestly had to be done.

If the author writes what we all want to happen—characters meet, fall in love with no conflicts, the end—there wouldn’t be a book!!

Life was supposed to get easier…

At least that’s what Tatum had hoped. New school year, great boyfriend…and things with her and Zach were supposed to be wonderful. Fairy tale wonderful.

Zach’s overbearing family controls his every move—and worse, they want to control Tatum. Now Zach is pressuring her to ‘speak for him’, which means she’ll not only be committed to him but also his mob family. Where’s the guy she fell in love with? To make matters worse, her friends introduce her to Nigel, the new guy who is more tempting than Tatum wishes.

So which will Tatum give in to…coercion or temptation?

Damn . . . Mom really stuck her neck out for me. I placed my hand over hers. She grinned, but kept her eyes on Gramps.

Gramps looked at her as if he were deciding how to dismantle a shelf. “I’ll be damned if we risk ourselves for anybody outside the family right now. Bottom line. She hasn’t, and won’t speak for you. There’s other fish in the sea. Lots of choices.” When Gramps was sincere about something, he bopped his hand up and down. “Like good Italian girls that understand how families work.”

Mom crossed her legs. “I told you before, Gramps, that won’t work.”

I looked at them, they both wore death glares. “You said what won’t work, Mom?”

She released my arm and shot her hand up, silencing me.

Gramps leaned forward, taking a quick puff. “Davide and I have talked. He’s older than I and quickly tiring. He wants to be reassured his empire will be in good hands. We’ve talked about you and your ability to lead, Zacharia. I see the potential you have. With my help, you can take his empire over if you marry Mariacella. She’s grown and ready to speak for—”

“Mariacella? I thought we were trying to cut ties to families like that?” I asked.

Mother looked at me. “You remember playing with her as a child? She’s grown now, and Gramps was cutting ties, until Davide reached out to him.” Mother turned to Gramps. “I was also under the impression we had to keep a low profile.”

“Nah.” This was absurd. “Princess?” I had to stop myself from laughing at the most ridiculous idea ever. “Sorry, Gramps, but I could never be with a girl like that, I’d rather—”

“You’re wrong, my grandson. That’s exactly the kind of girl you need in this family. A strong Italian woman. Now, you may think you’re in love with this German, but once you’re in good company with an Italian woman, you’ll see this is all—”

Mariacella was known by many families to be a terrible princess. She’d grown up, all right. She was demanding, selfish, irrational—all traits Gramps was aware of but ignored. Davide would do anything for his daughter, and she knew it. Gramps wouldn’t push me into any kind of relationship with Princess just because he wanted Davide’s empire too. Would he? He’d go that far?

Mother sat perfectly straight with her legs crossed, and the top leg bounced up and down. “Zach’s Tatum is stronger. Mariacella doesn’t compare to his German. I’ve told you over and over, I have seen Tatum in our future. And for the last time, it won’t work.” She looked at me. “Zach, I’m sorry. But Tate can’t get the extra protection right now. You’ll have to figure something else out. Let’s go.”

She stood up and stepped around the chair. I followed my mother’s lead—exactly what we were to do in this family. My mother was the Lead Woman in the U.S. She had more power and say than any other woman in the entire family.

Suzie T. Roos is from, and has settled in, St. Louis with her husband, two children and a number of foster pets at any given time.

She and her husband have lived everywhere from Philadelphia, PA to out West in Santa Monica, CA. They’re thankful they could expose their children to different American lifestyles and cultures.

Besides writing, Suzie’s hobbies include movies, traveling, and especially concert going with her husband and friends.

She’s always been an animal lover and animal rights advocate. She is certified by FEMA in IS-00011.a Animal in Disasters: Community Planning. She’s also an active volunteer at the Humane Society of Missouri.