Today I have the pleasure of introducing you to Juno Rushdan. She's a debut author for Sourcebooks and has a compelling story for you to all read.

My Inspiration for a Romantic Suspense series and what to do in the case of a real pandemic.

The idea for my romantic thriller series came to me one morning before my family woke up while the house was quiet. In my sleep-fogged mind, an image of a female covert operative emerged. She was given a high-priority mission to recruit someone and had no time to prepare. The assignment brought her face-to-face with the love of her life, whom she thought for years was dead. Once I had a few cups of coffee in my system, I used my background as a military intelligence officer to fill in the blanks and add realism to the story.

I spent years supporting special forces, air crews, and poring over CBRN (chemical, biological, radiological, nuclear, and high-yield explosive) threat assessments while stuck in a windowless sensitive compartmented information facility. Either it was all that time without sunlight or war-gaming response plans to various doomsday scenarios that shaped the foundation for the Final Hour series and specifically Every Last Breath.

In the military intelligence field, there’s always a high-ops tempo, a need to get things right the first time because lives are on the line, and long work days that often test your limits. I incorporated those factors to flesh out the world and used elements of special forces operators that I’ve known to create my characters. Readers will also find plenty of action, a thrilling plot, and a sexy, second-chance romance as my hero and heroine race against time to prevent a pandemic.

The biological weapon in Every Last Breath is an engineered form of smallpox that is far more virulent and dangerous. Many people might think this outside the realm of possibility, but the opposite is true. The Department of Defense commissioned a report on the role of synthetic biology in creating new bioterror threats and the results ranked it as a top threat.

With SARS, MERS, Ebola, Zika, and the terrifying prospect of a bioengineered pathogen emerging one day, it’s smart to know how to protect yourself. In the event of a catastrophic pandemic, there are some simple things you can do to increase your chances of survival.

Don’t panic. Prepare. An outbreak can last for days, months, and worst-case scenario, years. Create a plan with this in mind.

Stock up. Get a two-month supply of non-perishable food that doesn’t need to be refrigerated or cooked and clean water. You need about a gallon of water per person per day to drink and for sanitation. Call in refills of prescription medication before chaos ensues. Don’t forget to buy a first aid kit and plenty of over-the-counter medicine such as painkillers.

Fuel. Ensure your car has a full tank of gas and fill up a spare can.

Cash. Don’t count on ATMs several days after an outbreak. They will most likely be out of cash or out of order. Have money on hand as soon as possible once you’ve heard about an outbreak.

Doomsday essentials. If you can get your prepper hands on a NIOSH-95 respirator, that would be best, but any facemask is better than not having one. You’ll also need gloves and goggles—heaven forbid an infected droplet gets into your eye. To keep yourself and home clean, be sure to have antiseptic, soap, sanitizer, and disinfectant. Duct tape is your friend. Use it to seal windows and doors.

Check the TV and/or a portable radio for updates from the CDC. The sooner you know what type of disease you’re dealing with—one that is transmitted through bodily fluids or something airborne—the better. You also need to know what symptoms to look out for.

Limit contact with people. This will not only help you reduce your chances of getting exposed, but in the event you are the one who is sick, you won’t become a super spreader. Stay away from schools, airports, churches, and hospitals. Quarantine your family until the pandemic is over or you run out of food and water. Pray for the former.

1 chance to get it right

Maddox Kinkade is an expert at managing the impossible. Tasked with neutralizing a lethal bioweapon, she turns to the one person capable of helping her stop the threat of pandemic in time: the love of her life, back from the dead and mad as hell at her supposed betrayal. Recruiting Cole to save millions of lives may be harder than resisting the attraction still burning between them, but Maddox will do whatever it takes...even if it destroys her.

When Maddox crashes back into Cole Matthews' life, he wants to fight back. He wants to hate her. But the crisis is too strong to ignore, and soon the two former lovers find themselves working side-by-side in a breakneck race to stop a world-class killer with a secret that could end everything.

The clock is ticking.

This giveaway is now over. The lucky winner is: Sharon Extine 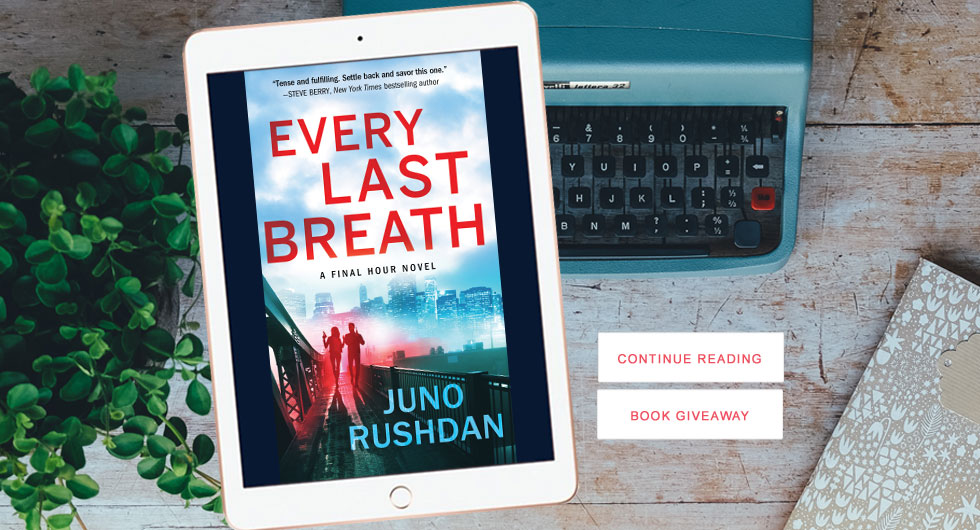