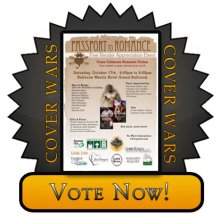 Night Owl Reviews is the official sponsor of the Emerald City Writers Conference Book Cover contest. During the conference there is an awesome reader event taking place. Join us if you can.

The Finalist Voting is Now Over.  The top 4 will be voted upon at the Passport to Romance Reader Appreciation Event. The crowd will vote live for the overall best cover.

Below find out how many votes were put in for each cover.

From here the ECWC will take the top voted covers and showcase them at the event for voting.

76 Votes  -  Heartbreak On A Stick by Sabrina York

When A-List movie star Jason Sherwood returns to the hometown that once rejected him, he has one goal in mind: Getting revenge on the woman who broke his heart so many years ago. But when he discovers his assumptions about her were wrong, he only wants to win her back. Hopefully, it’s not too late. Gina Fox has always pined for her high school lover…and now he has returned, turning her world upside down. But life isn't as simple now as it was then. And she can’t get over the fact that Jason walked away from her without a word. When he launches a sultry seduction, she tries, with everything in her, to resist…because at his core, Jason is nothing but heartbreak on a stick.

Originally published as part of the Hometown Heroes collection.

A summer of seduction...

Jules Carmichael needs to get her life together. Pronto. School's been hell, there was that tiny stint in rehab, and worst of all, she's lost her cushy summer job. The only available work is at Office Jax, home of horrid 90s music and the biggest jerk on this side of the galaxy...

Recovering from a brutal break-up and taking a hiatus from college, Ryan DeShane has just discovered the “6 Ultimate Steps to the Perfect Summer Fling.” It's a brilliant distraction, and Jules is a tantalizing target. But the “steps” work a little too well, because he and Jules are definitely, uh, flinging. And it's only a matter of time before Ryan's foolproof plan starts to seriously unravel...

Mei Barrett has been hiding all of her life. Raised in solitude by her beloved father, she’s been trained to fight, to adapt, to defend. She couldn’t prevent his death, however, when it comes at the hands of a mysterious creature straight out of legend. She could only run—and learn how to hide in plain sight.

For four long years Mei has lived alone on the fringes of a society still recovering from the devastation of quakes and disasters along the infamous Ring of Fire. Mei’s concerns are more immediate however. She must hide her eyes and their despised mutation, and she must stay one step ahead of the strange wind demon that continues to hunt her.

Detection was inevitable. But Mei begins to make some discoveries of her own. For it seems that her old enemy is not the only mythical creature on the loose. Nor is she the only one fighting them.

And perhaps her own tragedies are not as far removed from those the world is facing, after all.

Willow’s next discovery could get her killed.

Willow Winters has been safely ensconced in London managing the international division of the Winters Corporation. But the vicious Kaleidoscope Group is relentless in its pursuit of the Winters sisters and their scientific breakthroughs. They’ve planted a mole in the company ranks, making Willow’s paranormal abilities crucial in the search for the traitor. Unearthing this spy will expose Willow as a threat and put her squarely in the sights of the murderous Kaleidoscope Group.

Wyatt Farraday is a military liaison to the Winters Corporation. Consumed with keeping Victory and Payton Winters alive, he’s had no life of his own. Now the third triplet has returned home and his job just got exponentially harder. Willow outdoes her sisters in the hardheaded department. She’s independent and can take care of herself and she doesn’t need Wyatt to watch out for her. But Wyatt’s determined to watch her in every way he can.

Willow’s Discovery is book three in The Winters Sisters series. Begin your adventure with Book One: Chasing Victory and Book Two: Payton’s Pursuit.