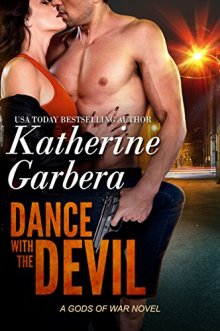 First Chapter Excerpt: Dance with the Devil by Katherine Garbera

Hi Everyone, I'm Katherine Garbera and my new book is Dance with the Devil.

The idea for the story came from watching season 2 of Daredevil on Netflix. There is this character...the Punisher who has lost everything and he was so raw and angsty, I thought I’d like to write a character like that.  Which kind of got me thinking about violence and how my hero would be born and raised in violence.  Like violence soothes him, it’s what he’s good at it, it’s what he expects life to dish out to him and so when he falls in love with the heroine he can’t believe it.

Dance With The Devil - Gods Of War Book 1

Kaylee Thomas escaped from Madrid, taking secrets with her that could get her killed. As an cyber operative for Grimaldi Global, Kaylee’s single-minded focus is on tracking down criminals who use the internet to hide their identity. A survivor of cyber bullying, she uses her skills to ensure that no one can hide on the internet.

Mick O’Halloran is a covert ops agent for Grimaldi Global and leader of the Ares team. Saving lives and protecting others is a way of life for him. But babysitting a computer geek sounds like a job better left for the boys back in the office until he meets Kaylee. Sparks fly between them as he takes her into protective custody until the facts she’s uncovered can be verified.

But some secrets can’t stay hidden and when an assassin comes calling Mick and Kaylee go on the hunt for the mole inside their group. It’ll take every bit of her computer savvy and his lethal skills to keep them alive. Releasing the information that Kaylee has uncovered threatens to burn the world down around them.

They were wheels up and on their way back to Virginia before Mick O’Halloran leaned back in the large leather seat that had been custom-made for him and finally let himself breathe. That was it. The last vestiges of his old life and his old world were gone. He wore a designer suit—hell, he didn’t know which one. Linc had picked it out for him so he’d look respectable when he appeared before the International Court of Justice to testify against his former commander for several counts of torture, cruel treatment, and outrages upon personal dignity on the territory and people of Afghanistan.

“Only you would ruin a Tom Ford suit with blood,” Linc Garrison said as the plane reached altitude and he turned his large leather chair to face Mick.

“What can I say? Seeing my old CO made me want to let off some steam,” Mick said. He didn’t apologize to anyone and he knew Linc wasn’t looking for anything like that. Both men were part of a private security team for Grimaldi Global. The company they worked for did all kinds of security work, including cyber, covert and counter-intelligence. Mick was the head of Ares Team. They were a group of former military special ops who went into situations where a government couldn’t, and did what needed to be done.

Mick’s smartphone beeped and Linc turned his chair back to face the rest of the team.

“Director Truehart here. I’ve notified your pilot that I need you to stop in Madrid and pick up one of our cyber analysts. Meet her at the Atocha train station and bring her back to Virginia.”

That wasn’t in his resume. For one thing, he had been born in violence and it was where he thrived. Mick knew that half the time the bruises he wore had been earned after he had thrown the first punch. It had led to many nights in the brig when he’d been a recruit in the Army. And that short fuse had earned him a couple of demotions. The thing was, he couldn’t change. Sometimes the back of his neck started to itch and he knew that if he didn’t let off steam he was going to blow. And he usually did.

Mick wasn’t in the mood to listen to his boss, and he let him know by allowing the silence to build between them. Mick just stopped talking and lit the cigar he always carried in his pocket.

“I’m not going to sugarcoat it, Mick. I need you on this op.”

“It’s not like I’m saying no,” Mick said. But he wasn’t saying yes. He was on edge. The kind of edge he’d only ever been able to dull by spending three days in bed with a few women at the beach or by beating an opponent bloody in an underground fight club. Neither option was available to him, since Sam wanted him and the Ares Team in Madrid.

“What exactly are we supposed to do with this geek?”

“She’s not a geek,” Sam said. “Just protect and transport. I need her and the information she’s carrying back here ASAP.”

“And there’s a chance she won’t make it if she flies commercial?” Mick asked. He was the first to admit that most of the tech he used he didn’t understand. It seemed to him if everyone in the world was carrying around a smartphone, and the tech actually worked as advertised, there wouldn’t be so many dumb messes for him and the Ares Team to clean up.

“Would I be sending your team if I didn’t think there was?” Sam countered.

He wasn’t ticked at Sam. He knew that Truehart had a job to do and always allocated the resources that were best suited for each op. That meant his team was headed to Spain.

“If you wanted gracious, you would have put Linc in charge,” Mick said.

“And her team. There are two others working this op with her. She’s the only one with the secure intel, but I’m not sure that anyone on the outside will know that. I want them back on US soil so we can keep them safe while we verify the information.”

“Yes. I know you hate that. That’s why I put Aphrodite Team on it. I’ve sent the info on the op to your tablet. Get Cory to show you how to pull it up.”

“Screw you. I can figure out tech. I just don’t like it.”

Mick pulled his tablet toward him and accessed the file that Sam had sent. The photo was of a woman with long black hair that hung neatly around a heart-shaped face. She wasn’t smiling, and her clear gray eyes stared earnestly out of the photo. There was a keen intelligence in her eyes but as his gaze drifted down to her lips he almost groaned.

Her mouth made him think of sex.

Damn. He really needed some leave. It had been too long since he got laid if looking at this computer goddess—geek!—got him hot and bothered.

“I told her you’d be there at eighteen hundred.”

“That’s cutting it close,” Mick said. They were already in the air, but by the time they landed at the private airstrip and he headed into Madrid it would be tight.

He forwarded the file from the tablet to his encrypted phone. The tough case that he’d been issued for it looked as if it had been run over by a truck…which was pretty close. But it still functioned.

“This situation is trickier than I can tell you right now. But the danger is real. And I need her safely back here.”

“I won’t disappoint,” he said.

“You never do,” Sam replied as he disconnected the call.

“We’ve got an assignment, boys.” He ran through what Sam had and hadn’t said. This woman and her team… What the hell had they uncovered that they couldn’t take a commercial flight back to headquarters? He was still running the different scenarios through his head as his team moved to the conference table in the middle of the private jet.

Many thought they were little more than mercenaries. But they were a loyal team who answered not only to Sam and the other directors of Grimaldi Global, but also to their own moral code.

Linc Garrison was the team pretty boy, heir to the Garrison manufacturing fortune, and his second in command. Linc was a former Navy SEAL who was one of the youngest to make the teams, and had been decorated many times for his work. But he was better known for his antics. He was a playboy and the press loved him. His status also provided great cover and distraction for the team when they were in a large city.

Cade Montauk was the team medic and the one they always sent undercover when they needed an inside man. He had gift for blending in and adopting accents, and an attitude that provided the cover he needed to get information and get out. He was a marksman with an impressive kill record, but Mick knew that Cade preferred not to use his weapon.

Cory Wilson was the communications expert. He loved tech as much as Mick hated it, and never hesitated to take Mick to task for his rough treatment of his equipment. Cory kept them all in contact with each other and made sure that no one else could track them.

Lastly, Frank Ross oversaw logistics and functioned as the team’s sniper. Scarily accurate, he was someone who saw the bigger picture, since he was usually positioned high above them and able to see the entire operation as it unfolded.

Mick knew what the others saw when they looked at him. His face, tough and often sporting scabs and bruises, had been labeled a harbinger of death in some areas of the Far East. He did jobs that required him to be up close and personal. He was a quick and clean soldier who meted out justice at the biding of his bosses.

“We’re being diverted to Madrid to pick up a computer analyst and her team,” he said as they all sat down.

“Great. Glad we could accommodate your palate,” Mick said. “We’re moving quick on this. Once we grab the analyst and her team we’re back on the plane and back in the US. Whatever intel she has is dangerous.”

Katherine Garbera is the USA Today best-selling author of more than 90 books. Writing is the chief focus of her time after her family and the only thing she likes more than working on her own books is reading other authors. She is a frequent speaker at conferences and loves the opportunity to talk about writing with anyone who'll listen.

Garbera started making up stories for her own benefit when she was on a competitive swim team in high school. Though she went to State and usually medaled at swim meets, Katherine says her heart wasn't in swimming but rather in the stories she created as she swam laps at practice.

She worked for The Walt Disney World Company for 15 years and did everything from being a hostess on It's a Small World, to saving swimmers at the Grand Floridian Resort, to touring around VIPs such as Jack Valenti at the Disney-MGM Studios and being a production page on the New Mickey Mouse Club--yes, it might be possible that Britney, Justine and Christina owe her a nod of thanks for keeping all those kids who had to go to the bathroom from interrupting their performances.

Her books have been featured in magazines such as REDBOOK (11/98)and have even been featured on the large JumboTron in Times Square, and excerpted in COSMO (7/10)