Sourcebooks Casablanca author Margaret Brownley has stopped on over at Night Owl Romance. She's ready to blog and share her romance book series. The first book in the Haywire Brides has just released and you're about to meet her Haywire Brides. As always, the Sourcebooks art team as brought this romance book couple to life. They are sweet looking. Don't miss out on the giveaway below. Sourcebooks is giving away a print copy to a lucky romance reader.

I’m sure you’ve heard the Yiddish saying “Man plans; God laughs” (Man Tracht un Got Lacht).  Not only has this been true in my own life, it’s also true for the three heroines in my Haywire Bride series.

All three women have great plans for their lives, but nothing works out the way they hoped.

In the opening chapter of Cowboy Charm School, we meet, Kate Denver, owner of the Haywire Book and Sweet shop.  She’s standing at the altar on her wedding day, about to marry her childhood sweetheart. Everything is just as she’d planned. The weather is perfect, the church is packed, and she looks and feels beautiful.

Her only regret is that her Uncle Joe hadn’t lived to see this day.  He and his wife adopted Kate after she’d come west on an orphan train at the age of six and treated her like their own daughter.  A candy-maker by trade, Uncle Joe taught her how to make candy, run the shop, and give each customer something to smile about.  Kate excels at all three.  That is, when she isn’t putting her life at risk saving an animal or child in peril.

Now, on her wedding day, she has no notion that things are about to go terribly wrong. For just as she’s about to say I do, the church doors fly open and a tall, handsome stranger runs down the aisle yelling “Stop the wedding,” and suddenly Kate’s life takes yet another unexpected turn.

In book two, The Cowboy Meets His Match (2019), we meet another bride whose plans go haywire. Anxious to leave Boston and her family scandal, Emily answers a mail-order bride ad and heads for Texas.

This wedding takes place in the judge’s chambers. Seeing the handsome rancher for the first time, Emily thinks she’s the luckiest girl alive.

Her luck, however, doesn’t last long. For she soon finds out that life on a ranch is not for her. The heat, dust, and flies prove to be more than she can bear.  Worse, she never met a four-legged creature she liked—and that goes double for cattle.

Her handsome rancher husband, Chase McKnight, soon finds himself in a terrible dilemma.  If he wants to keep his wife, he’ll have to give up his beloved ranch. For it sure doesn’t look like he can keep them both.

In book three, we meet widow Christy Blackwell, the mother of two children; a seven-year-old girl and six-year-old boy.

Christy is an outlaw’s daughter and still has bitter memories of growing up under her father’s dark shadow.  For that reason, she will do anything to see that her children never suffer the same fate.

However, trouble arrives at her farm in the guise of Texas Ranger, Trent Taggert, intent upon proving her husband guilty for a series of stage holdups.  When he meets Christy Blackwell, she’s on the business side of a shotgun and he knows his job just got a whole lot harder.  For she’s as determined to protect her husband’s reputation as Trent is to destroy it—

And, so, the battle begins.

Question for Readers: Have you ever had a plan go haywire?  Did it turn out to be a bust or a blessing in disguise?

Texas Ranger Brett Tucker hates to break up a wedding, but the groom—notorious criminal Frank Foster—is a danger to any woman. So he busts into the church, guns blazing...only to find he has the wrong man.

Bride-to-be Kate Denver is appalled by her fiancé's over-the-top reaction to the innocent mistake and calls off the wedding—for good. Guilt-ridden, Brett's desperate to get them back on track. But the more time he spends with Kate, the harder he falls...and the more he yearns to prove that he's her true match in every way.

This giveaway is over. The lucky winner is posted in the comments.

New York Times bestselling author MARGARET BROWNLEY has penned more than forty-five novels and novellas. She's a two-time Romance Writers of American RITA® finalist and has written for a TV soap. She is also a recipient of the Romantic Times Pioneer Award.  Not bad for someone who flunked eighth-grade English.  Just don't ask her to diagram a sentence.

Where readers can find Margaret on the Internet? 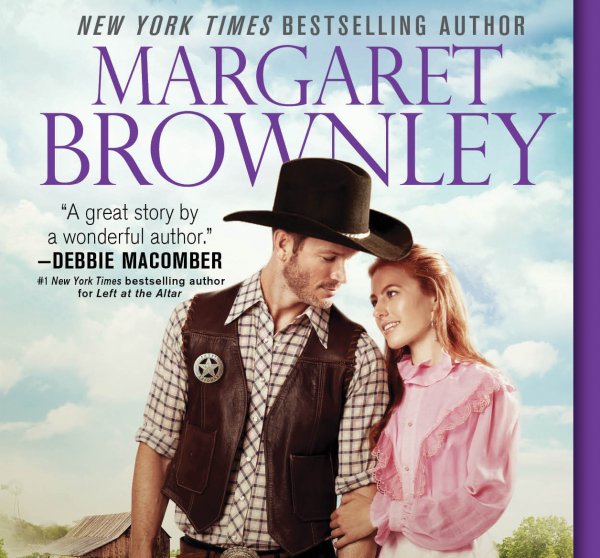