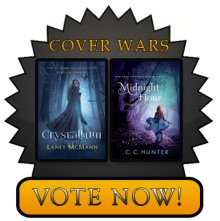 Cover Wars continues with Crystallum VS Midnight Hour. Vote for the cover you like the best!

When you vote you also get entered to win Kindle copies of both books. We will have one winner who gets them both!

The winning cover for this Cover Wars event is Midnight Hour by C. C. Hunter!

This was a really close vote. Crystallum got 58 Votes & Midnight Hour got 61 votes.

Kadence Sparrow wasn’t born a devil’s child—she was turned into one. Now, she’s hiding from the truth, and running for her life.

For years, Kade’s true nature has lurked behind an illusion, so when her dad gets another job transfer, she knows the drill: no close friends, no boyfriends, and most importantly: don’t expose what she is. Ever. Keeping secrets is easy. Lies are second nature. So is the loneliness—and the fear, but when the Shadows attack, and Kade meets Cole Spires, she could expose everything she’s trying to hide.

As one of the Celestial Children, Cole lives by an oath: defend the Ward, protect the Primordial race, guard the gateways, and stick to his own. Everything else is a distraction, and besides, he’s lost enough. Cole’s job is clear, and no one his age does it better. So, when he meets Kade in a club downtown, he assumes she just wants his attention. Most girls do, but Cole soon realizes … Kade isn’t like most girls.

The children of heaven and hell are living among us, fighting an age-old war. And falling for someone from the opposition is not an option. But a chance encounter between Kade and Cole will blur the rules, as Kade’s journey to keep her truth hidden catapults them together and into a web of lies, forcing her to not only face the demon inside her, but to answer the hardest question of all.

Which is thicker—blood or water?

After captivating millions across the globe, the Shadow Falls saga reaches its final—and most unforgettable—chapter yet! Prepare to fall in love all over again. . .

Being a dyslexic witch is a curse in itself, but Miranda Kane’s time at Shadow Falls has helped her harness her magical powers. Now, just as she’s finally mastered them and is preparing to graduate with her friends, a near-death experience threatens to ruin it all.

Miranda awakens in the hospital with a mysterious tattoo that no one can explain. As she struggles to make sense of it – and questions her feelings for a certain irresistible shape-shifter and a hot new guy – the strange markings begin to spread all over her body, leaving her desperate to find answers. But before she can solve that problem, a new one arises: her sister is missing.

Has her sister been kidnapped? Miranda will risk her life to find out. Will she live to share the day she’s worked so hard for with her friends? When the clock strikes midnight, will Miranda make it to her graduation at Shadow Falls?