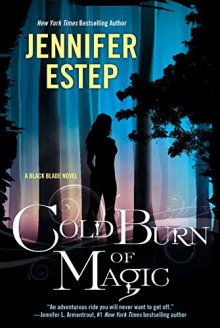 Jennifer Estep joins us today to share her latest release. Cold Burn of Magic starts out a new YA urban fantasy series..

THERE BE MONSTERS HERE…

It’s not as great as you’d think, living in a tourist town that’s known as “the most magical place in America.” Same boring high school, just twice as many monsters under the bridges and rival Families killing each other for power.

I try to keep out of it. I’ve got my mom’s bloodiron sword and my slightly illegal home in the basement of the municipal library. And a couple of Talents I try to keep quiet, including very light fingers and a way with a lock pick.

But then some nasty characters bring their Family feud into my friend’s pawn shop, and I have to make a call—get involved, or watch a cute guy die because I didn’t. I guess I made the wrong choice, because now I’m stuck putting everything on the line for Devon Sinclair. My mom was murdered because of the Families, and it looks like I’m going to end up just like her…

"An adventurous ride you will never want to get off." -- Jennifer L. Armentrout, #1 New York Times bestselling author

I left the row houses behind and stepped onto a gray cobblestone bridge that arched over the Bloodiron River. Three Xs had been carved into a stone set into the short column that fronted the right side of the bridge. A clear warning. There be a monster here.

I paused in the middle of the bridge, just before I would cross over to the far side, looked over the edge, and listened, but I didn’t see or hear anything except the soft ripple and rush of the river below. No metal clanking on the stones, no claws crabbing over the rocks in my direction, no monster licking its chops in anticipation of sinking its teeth into me. Either the lochness who lived under the bridge was cruising down the river like the black, oversize octopus it resembled or it was already chowing down on its dinner for the night.

I thought about crossing the rest of the bridge without paying the usual toll, but it was better not to chance it. Besides, it was the polite thing to do. My mom had been big on that. On paying the tolls, following the old traditions, and giving every creature—mortal, magick, and monster—the respect it deserved. Especially the ones that could eat you in one gulp.

So I dug through my pockets and retrieved three quarters. I placed the coins on a worn, smooth stone, also marked with three Xs, set in the middle of the right side of the bridge.

Pretty cheap, if you asked me, especially given the insanely high prices the tourists and we locals paid for everything in town. I could have given the monster the crumpled, five-dollar bill in my pocket, but this lochness preferred change for some reason. Maybe because the coins were so shiny, glimmering like perfect silver circles. Although I had no idea what the creature could possibly do with quarters. Maybe the lochness took the change to some hidden lair, made a nest out of the coins, and slept in the middle of them, like dragons with gold, gems, and other treasures in those old fairy tales.

The lochness wasn’t the only monster in town, and each kind required different forms of tribute to let you pass by safely. Small things mostly, like a lock of hair or a drop of blood or even a candy bar. That last one was for the tree trolls. Apparently, they loved their sugary snacks. But if some quarters or a chocolate bar kept something from attacking, killing, and eating me, then it was worth the effort to be nice and play along with the monsters.

My toll paid, I turned and walked down the far side of the bridge—

My steps faltered, but I tightened my grip on my sword and resisted the urge to look over my shoulder for a glimpse of whatever had snatched my coins off the center stone.

Sometimes, Talent or not, it was better not to see things.

NEXT IN THE SERIES:

Jennifer Estep is a New York Times bestselling author, prowling the streets of her imagination in search of her next fantasy idea.

Jennifer writes the Black Blade young adult urban fantasy series for Kensington. The series focuses on Lila Merriweather, a 17-year-old thief who lives in Cloudburst Falls, West Virginia, a town dubbed “the most magical place in America.” Tourists come from around the world to tour all the magic-themed shops and attractions, as well as see monsters like tree trolls, copper crushers, and more in their natural habitats.

Lila does her best to stay off the grid and avoid the Families — mobs — who control the town. But when she saves a member of the Sinclair Family during an attack, Lila finds herself caught in the middle of a brewing war between the Sinclairs and the Draconis, the two most powerful Families in town.