A Recipe & a Book by Teri Anne Stanley, Author of Big Chance Cowboy

Today we have the lovely Teri Anne Stanley joining us. She has an excerpt to share and a recipe from her character Lizzie.

Even humans get a second chance

After a disastrous mistake disbanded his Army unit, Adam Collins has returned home to Big Chance, Texas. He just wants to sell the family ranch, set up his sister and grandfather with the funds, and then ride off into the sunset.

Lizzie Vanhook has landed back in her hometown, heartbroken and jobless. Adding to her troubles is the unruly stray who's claimed her as his own. Lizzie knows she's in over her head. Enter Adam—not only does he work with dogs, he's also tall, dark, handsome, and the one who got away...

Adam wants nothing to do with other people, much less dogs. But when his old flame asks him to help her train her scruffy dog, he can't say no. As his reluctant heart opens up, the impossible seems possible: a second chance with the woman he's always loved in a place where he, his friends, and the other strays who show up can heal and call home, Big Chance, Texas.

This is Lizzie’s favorite appetizer—it’s both fancy and easy!

Wrap a bit of cheese with a basil leaf, pierce with toothpick, add a tomato, put on a serving plate, repeat. Drizzle with olive oil and sprinkle with seasoning. Enjoy!

Houston was three hours and a couple of broken dreams behind her when Lizzie Vanhook crossed the Chance County line, right about the same time the Check Tire Pressure light in her dashboard blinked on.

Crap. She’d been in the homestretch. There was something symbolic about an uninterrupted beeline home, to the place she planned to find her center of gravity. Maybe start doing yoga. Eat all organic. Drink herbal tea and learn to play the pan flute.

Flipping the turn signal, she pulled into Big America Fuel and stopped near the sign for Free Air. She stepped out onto the cracked gray asphalt and bent to search for the pressure gauge her dad always insisted she keep in the pocket of the door but came up empty.

She abandoned the driver’s side and went to the passenger door, hesitating when she noticed the dog leaning against the nearby air pump. The big dog. It was missing some significant patches of hair, and the rest was black and matted. Its big, shiny teeth were bared in what she hoped was a friendly smile. Its football-player-forearm-sized tail thumped the ground, raising a cloud of sunbaked, Central Texas dust. Lizzie sneezed. The dog stopped wagging and raised an ear in her direction.

“Good boy,” she told it, hoping that was the right thing to say. It was one thing to misunderstand the intentions of a tiny fuzzball of a dog and need a few stitches. Ignoring a warning from something this size could be lethal. It had to weigh at least a hundred pounds.

She kept the beast in her peripheral vision while she bent to search for the tire gauge. Ah ha!

“No!” Lizzie straightened and turned, the pressure gauge clenched in her raised fist.

“Whoa there!” A sun-bronzed elderly man, about half Lizzie’s size, held his hands in front of him in a gesture of peace.

“I’m sorry,” she said, relaxing slightly. “The dog—” She gestured but the thing was gone.

“Didn’t mean to scare you, darlin’,” the old man said, tilting his Big America ball cap back. “We’re a little slow today, so I thought I’d check on you.” He indicated the vacant parking lot.

“It’s fine,” she said. She should remember she was back on her own turf, where it was way more likely that a stranger at a gas station really did want to help you out rather than distract you and rob you blind. “It’s been a long drive, and I’m a little overcaffeinated.”

“No problem. You local?”

“Yes,” Lizzie said. Even though she’d been gone for years, it was about to be true again.

The attendant squinted at the tool she carried. “You got a leaky tire?”

“I don’t know.” She stooped to unscrew the cap of the first valve. “The little light went on while I was driving.” Nope. That one wasn’t low. She put the cap back on and continued her way around the car while her new friend followed, chatting about Big Chance. He wondered about the likelihood the Chance County High School quarterback would get a scholarship offer. Lizzie had no idea; she hadn’t been keeping up. He speculated on the probability that the Feed and Seed might close, now that there was a new Home Depot over in Fredericksburg. She expected she’d hear about it from her mom and dad if the local place was closing and wondered if her friend Emma still worked there.

It had been ages since Lizzie had spoken to Emma, and a wave of guilt washed over her. Finally, the last valve was checked, and she screwed the cap back on. She reached through the open window and dropped the tire gauge on the passenger seat while she said “Everybody’s full. Must be a false alarm.” She wrinkled her nose as she caught a whiff of the interior of her car. Sheesh. The service station probably sold air fresheners; maybe she should invest in one. Compared to the breezy, wide open spaces of home, her car smelled like an inside-out dead deer. She wanted to get home, though, so she decided to deal with it later.

It wasn’t until she was backing out onto the main road that she realized the awful smell inside her vehicle wasn’t just long-drive funk. There was something—something big and black and furry—sitting in the middle of her back seat, panting and grinning in her rearview mirror.

When Teri Anne Stanley isn’t writing sassy, sexy, love stories from her home, she’s probably doing some sort of arsty-crafsty thing and hanging with Mr. Stanley, her three favorite children, and the dogs. Sometimes she’s masquerading as a day job science geek. She’s definitely not cooking or cleaning. Visit her online at www.teriannestanley.com. Teri Ann lives near Sugartit, Kentucky (which is between Beaver Lick and Rabbit Hash. Seriously). 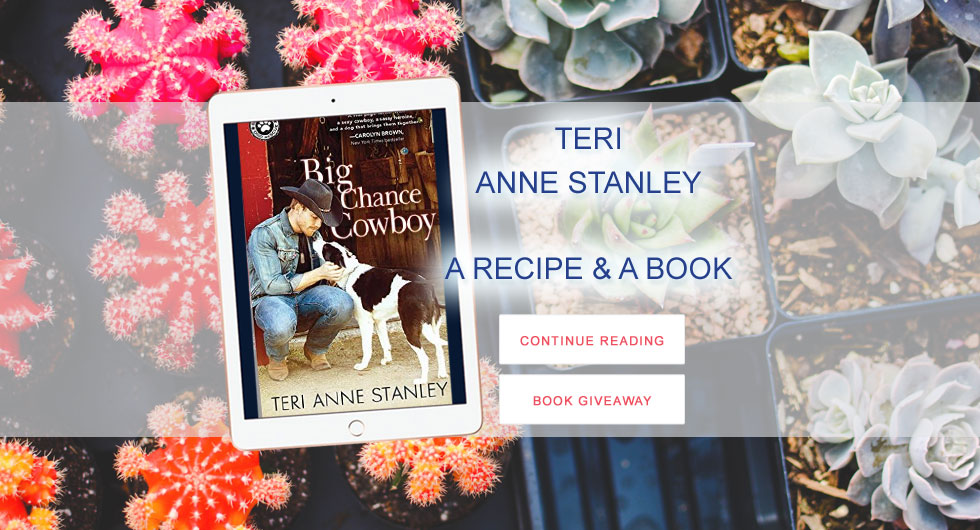