Viscount What? What is a Viscount and How Do You Pronounce That? (Romance Author University)

Jane Ashford has stopped over to share about Viscounts.

Thanks for coming Jane. What is a Viscount? How do you pronounce that? How do you become one? What title does his lady get? What would he wear? How does the title change hands?

The hero of A Lord Apart is a viscount (pronounced vi-count; his wife is a viscountess). So what’s a viscount? A viscount is the fourth rank in the British peerage, below an earl and above a baron. It’s not originally English. The title came over with William the Conqueror from the Continent. As Queen Victoria put it in her journal:

I spoke to Ld M. about the numbers of Peers present at the Coronation, & he said it was quite unprecedented. I observed that there were very few Viscounts, to which he replied "There are very few Viscounts," that they were an old sort of title & not really English; that they came from Vice-Comites; that Dukes & Barons were the only real English titles;—that Marquises were likewise not English, & that people were merely made Marquises, when it was not wished that they should be made Dukes.

Ld. M. is Lord Melbourne, Victoria’s prime minister, as you certainly know if you’ve watched the British television series about the young queen.

So, yes, the word viscount comes from Latin via Old French. The Romans used the term vicecomes for an imperial courtier or trusted appointee. Later French kings appointed counts to administer provinces, and viscounts were named to assist them. Originally these positions weren’t hereditary, because the king wanted to limit the power of his nobles and discourage rebellions. (Not a bad call, considering the French Revolution.) But in the end they began to be passed down to the viscounts’ sons.

The title was used in Normandy by the early eleventh century, William the Conqueror’s era. He was Duke of Normandy, and Norman viscounts were local administrators, working on his behalf. They made judgments, gathered taxes and other revenues, and often managed a local castle.

At least one viscount fought in William’s army at Hastings, and so the designation migrated to England when he took over. As a British rank, it was first noted in 1440, with the creation of Viscount Beaumont by King Henry VI. Thus, just as the rank of earl came from the Anglo-Saxons, viscount came from the French. Aristocratic inclusiveness!

A Lord Apart - The Way to a Lord's Heart Book 2

Family secrets, an unlikely alliance—and a love neither expected...

After his parents' sudden death, Daniel Frith, Viscount Whitfield, is struggling to unravel a web of chaotic family records. He is astonished to learn his father's will contains a mysterious legacy: a house left to a complete stranger. He knows nothing about the beautiful Penelope Pendleton and he's not sure he wants to...until she turns out to be a whiz at all those nasty tasks involved in estate administration...

Penelope has no idea why Rose Cottage was left to her. But it's a godsend after her brother's reckless actions disgraced her family. She had planned to stay out of Viscount Whitfield's way, not grow ever closer to him. But when they discover how entwined their families really are, Daniel and Penelope must collaborate to avoid a scandal that reaches much higher than they could have guessed...

Penelope found a man dismounting a fine blood horse on her doorstep. Stocky, brown-haired, with blunt features and a square jaw, he wasn’t classically handsome. But somehow he didn’t need to be. He held one’s attention by the sheer force of his presence. His expression suggested that he was accustomed to deference and obedience. Penelope took a step back. The last year had made her wary of such men.

The visitor looked her up and down. Was that disapproval? It couldn’t be hostility. Unless he’d somehow received word…no. Not yet. Impossible. Penelope wondered if she’d rubbed dust on her face. Her gown was crushed and wrinkled from hours in the post chaise, but it had once been expensive.

The name was unfamiliar. Penelope relaxed a little. He must be a neighbor. “Hello, Mr. Whitfield. I am—”

“I beg your pardon?”

“Rose Cottage was part of my estate until my father willed it to you,” he went on. “I’d like to know why.”

“Your father?” Penelope forgot all else as she latched onto this piece of information. The solicitor who’d tracked her down and told her about the legacy had refused to give her benefactor’s name. The bequest was anonymous, he insisted. If she wanted the cottage she wouldn’t ask. And really, wasn’t gratitude rather more appropriate than questions? He’d been even more arrogant than this man. “Your father,” she repeated. “Not Mr. Whitfield.”

He was a viscount, and he was glaring at her.

Kitty appeared in the doorway. “There’s spiders in the wood pile, miss,” she said. “Big ones.” She spread her hands four inches apart as she gazed at their visitor with open curiosity.

The tickle of a cough began in the back of Penelope’s throat. Not now, not now, she thought, swallowing frantically. But she couldn’t stop it. The spasm came. The hacking shook her.

Their visitor looked startled, then concerned. “For God’s sake get her some water,” he said.

Kitty spread her hands. “We ain’t got so much as a bucket, sir.”

The truculent viscount put an arm around Penelope’s shoulders and urged her inside. By this time she could think of nothing but her heaving chest and streaming eyes.

“Pump some water,” the man said to Kitty when they reached the kitchen. “Hurry up!”

Kitty jumped to obey. The man examined the stream as it began to flow. Seemingly satisfied, he held cupped hands below the spout and let them fill, then brought the water to Penelope. “Here. Drink!”

Despite her plight, she hesitated.

It wasn’t the water, Penelope thought; it was the curiously intimate service. But she was desperate. She bent and slurped liquid from his palms. Her lips brushed his skin as she drank. His fingertips touched her cheek, leaving a startling tingle behind. Finally, somewhat recovered, she croaked, “Flask.”

Kitty struck her forehead with one hand and ran upstairs to fetch the item. When she returned Penelope took a deeper drink.

“You take brandy for your cough?” asked their visitor.  He sounded amused and a bit scandalized.

“It’s water.” Her brother had used this flask for brandy. She drank again. At last the cough subsided. Penelope sagged, worn out by the paroxysm.

The unexpected viscount took her arm and led her out to the low stone wall that surrounded the front garden. “Sit. You’re ill.”

“I’m not. That is, I have a lingering cold, which will soon disappear.”

“You can’t stay here,” he said, looking around as if he hadn’t heard her.

“Beg all you like, I’m not leaving.” It was rude, but Penelope wouldn’t be ordered about by this stranger. And no one would tear her away from her new home and sanctuary now that she had it.

“My name is Penelope Pendleton.” She waited for a sign of recognition. He showed none.

“Why you were left a house by my father?”

“Well, apparently you don’t know, and he was your father.”

This made him stiffen. “Tell me about your family. Where do you come from? Who are your people?”

Penelope went still, hearing similar demands, in harsher voices, echoing in her memory. Freely offering information had not done her much good since the killings in Manchester. “Must you loom over me?” she said to gain time.

But that was a mistake because he sat down beside her on the wall, bringing those dark probing eyes much closer.

A cough threatened. This time, Penelope let it come, aware that her struggles made her unwanted visitor uncomfortable. By the time the spasm was over, she’d decided that she wasn’t going to tell him anything. Not until she knew a great deal more. She sipped from her flask. “You really must excuse me,” she rasped. “I’m not prepared to receive callers.” This was her house. She had the right to refuse visitors, for the first time in endless months. A privilege she hadn’t appreciated properly until she lost it.

The irritating young woman gazed at Daniel from watering eyes. Miss Penelope Pendleton was pale. Her oval face was undeniably pretty, surrounded by blades of blond hair. Her blue eyes were large and clear, and they had the steady, stubborn resolve of a woman with something to hide. Daniel was the local magistrate; he knew that look.

She coughed weakly into her hand. Now she was being piteous on purpose, to make him feel like a bully. There were twisty corners to this young lady. Daniel felt a brush of the astonishing sensation that had run through him when she drank from his hands. Her lips had been so delicate on his palms. He had to find out more about her, for a variety of reasons.

“I really think I must rest,” she said.

He was betrayed into an exasperated laugh “On what? The bare floorboards?”

“You can’t stay here alone,” he interrupted. The thought of her curled up in a nest of bedding was all too vivid.

“And she is what, fifteen?”

“Sixteen,” said the skinny young maid, who had not effaced herself but loitered in the open doorway of the house watching them with frank curiosity. “Do you think the gentleman might see about the spiders?” she asked her mistress.

Daniel was beginning to like this girl. “Happy to,” he replied before Miss Pendleton could object.

This giveaway is now over. The lucky winner is: Jana Leah 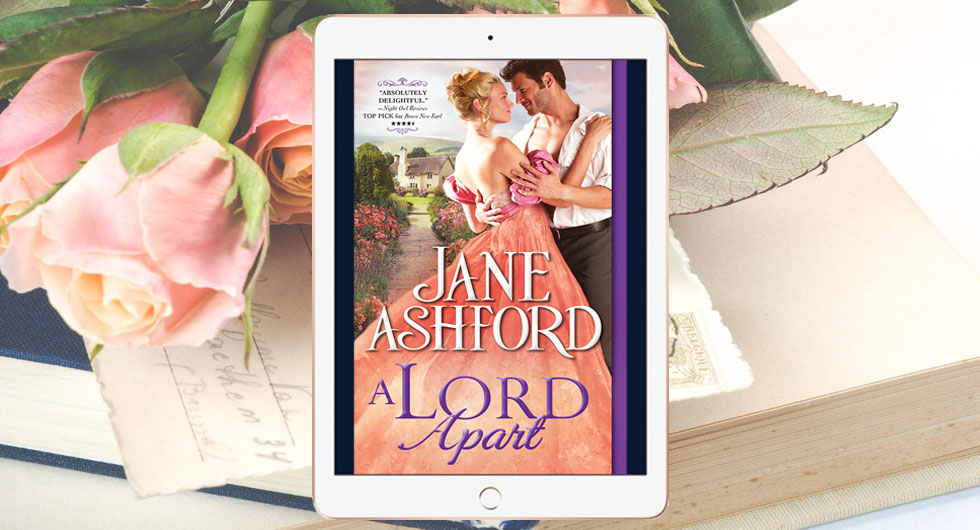