Over the years, I've gotten rid of books. But it was always painful. As I packed for my last move, I gave away boxes and boxes of books. Then when I unpacked, I gave away a few more as well. Deciding what books to keep, which ones to put on the shelf and which stay in a box in the closet is not easy. It pains me because these books are like friends. Some are craft tips awaiting use, while others are historical books for reference when creating worlds. Then there is the fiction. Don’t open the closet door unless you want to be buried. It’s not hoarding if it’s books. That’s my story and I’m sticking to it.

However, I'm supposed to reveal five reasons why I love books.

5) I’m not me. Within the pages of a book, I can be someone other than myself. I’ve flown Corsairs with the pilots of VMF 214 and explored strange, new worlds. No longer am I old, frumpy and overweight (not saying I am), but can be years younger and a gorgeous blond, brunette, or have long black hair. Books allow ordinary people to be more than themselves. With telepathic powers or skill with a sword, we become explorers or kick-ass heroines who save the world.

4) You meet the nicest people. I know the authors, even if it only virtually or through the bio on the back flap. In many cases, I know their characters even more and would honored to call them friend. Through the pages of books I’ve met handsome spies, hunky mages, and ship captains, both of vessels powered by sail as well as yet to be invented engines powered by dilithium crystals.

3) Journey to unknown lands. Thanks to books I’ve visited tropical southern islands (without paying for an airline ticket) and visited the lands of my ancestors. Footprints were left on worlds yet to be discovered. The wake from underwater explorations washed upon foreign shores. Of course, the travels weren’t always fun. Sometimes I had to fight my way in—or more often—out.

2) It’s in my genes. I can’t not love books. My father read every western in our local library. My mother had her own collections of books and I read them through, one book at a time, one series at a time before progressing to the library. Upon graduating school, my career choice was not to be an author, but a librarian. Books, books, and more books. Modern buildings with lots of windows or ancient buildings with rare, hand-illuminated manuscripts, it didn’t matter. That was to be my future. At least until the college changed the rules for graduation. Additional credits and the requirement of substitute teaching in an inner city during the riots killed the possibility of a degree.

And now the top reason why I love books.

1) Books allow me to ride magical equines, hang out with mages and fly with dragons. And who wouldn’t want to do that.

Three novellas (and two bonus short stories) of duty and honor, love and loss, happiness and despair from the world of the dragshi. As with any tale from history and legend, some contain larger than life deeds. Others are the simple story of a man or woman doing what must be done, regardless of the cost.

The dragshi are more than just a man or woman. Each are two beings–one a dragon, the other a human–sharing one body in space in time and able to change forms with the other at will.

But a lesson to be learned. When you shift into dragon form, sometimes Fate controls the flight.

Between Swords and Sickness -- The fever called the demon fire ravaged the city leaving only a handful of oldsters and teens to care for the sick and man the wall. Defending the sick and the dying, one man stood alone against an invading army. He had no hope but for dragon fire and talons. But Geelneach is only a man.

Fire and Ice – Mirabeesh was empress--until the day her token appeared in the lottery and she was chosen as diovi. Her fate? Fire or Ice.

Magic and Steel – Bodyguard to a lady dragon shifter threatened by a former suitor, Kedar dared not fail in his duty--or love the Lady Mairin Aledriwyr of the Dragshi.

Forever Bound– His mate sent to the other side of the veil by a crazed dragon hater, Lasair has two goals: to join his wife--and revenge.

The Unknown Patient – Trapped by duty, Etianne longed for the freedom offered other girls her age, to be fostered out to a village or craft hall. However she could not leave her clan without a healer. So she stayed. Her life became complicated when the pack train encountered an unconscious man lying in the middle of the trail.

A former feature-story writer and correspondent, Helen Henderson has also written fiction as long as she could remember. Her heritage reflects the contrasts of her Gemini sign. She is a descendent of a coal-miner's daughter and an aviation flight engineer. This dichotomy shows in her writing which crosses genres from historical adventures and westerns to science fiction and fantasy. In the world of romantic fantasy, she is the author of the Dragshi Chronicles and The Windmaster Novels. In her books, she invites you to join her on travels through the stars, or among fantasy worlds of the imagination. 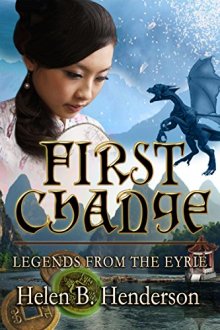